After receiving backlash for his sexist comments, Siddharth apologises to the badminton player for his rude joke. Â

The tale of controversies among celebrities and famous personalities is no hidden affair. There is nothing that can go unnoticed by the eyes of the netizens, be it an Instagram post or a tweet. The controversies that take place on social media are known by all. Although, it is fairly a choice to put opinions and thoughts on social media handles for the celebs, using the right words and statements becomes important when you are a public figure.

Well, where some of the posts receive an immense amount of love and appreciation, there is always criticism where there is appreciation. The netizens, for that matter donâ€™t spare a single update by celebs and other famous personalities, and this is the reason, trolling happens. 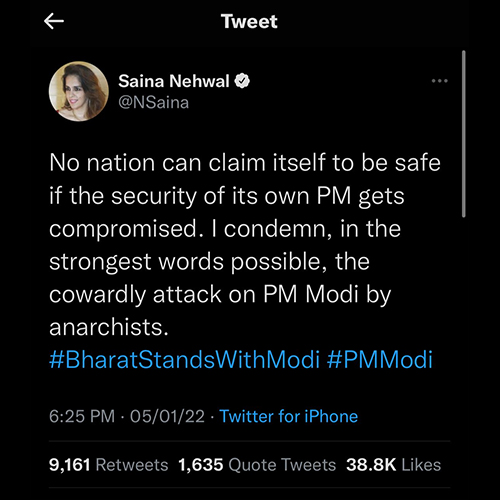 Recently, our national badminton player, Saina Nehwal had condemned the security breach of Prime Minister Narender Modi in Punjab. The ace badminton player took her twitter handle and wrote that in a country where the Prime Minister is unsafe, no one else is safe. Well, this was not really the deal that created a chaos all over the social media, but the reply to this post was. Â

Rang de basanti fame actor, Siddharth his reply to Nehwalâ€™s tweet was the reason that got him in trouble, which said, â€œSubtle cock champion of the world… Thank God we have protectors of India. Shame on you #Rihannaâ€.

Siddharth was accused of making a sexist remark against the badminton player, Saina Nehwal. However, the tweet was deleted after the backlash it faced, the netizens were too fast to notice it. The actorâ€™s sexist comment and his wordplay for the shuttlecock were the reason for him to get brutal rage of so many people and accusation of using â€˜vulgarâ€™ remarks for a lady 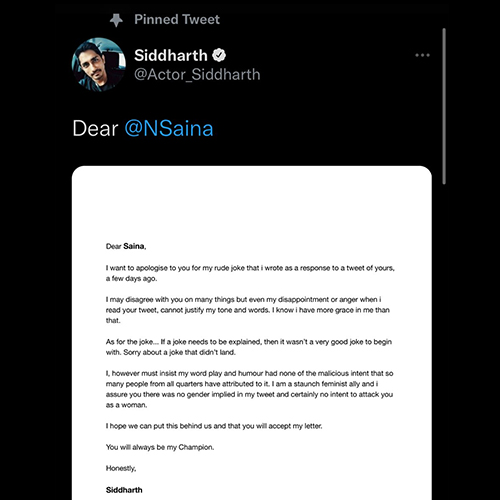 Actor Siddharth apologised to Saina Nehwal in a public post, justifying his intentions.Â

The backlash and the brutal hatred Siddharth faced, led him to delete his comment and apologise to Nehwal. The actor through an open letter, apologised to Saina Nehwal, where he wrote how his words were mistaken and he had no intention of hurting or disrespecting anyone.

On which, Saina Nehwalâ€™s reaction was fairly justified as some of had the same thoughts about the same. on being asked about the incident and the open apology from the actor, Nehwal said, â€˜He only said it and now he is apologising. It is about women, and no one should target a woman like that.â€™ Nehwal also said that she isnâ€™t bothered by this and she is happy in her own space. 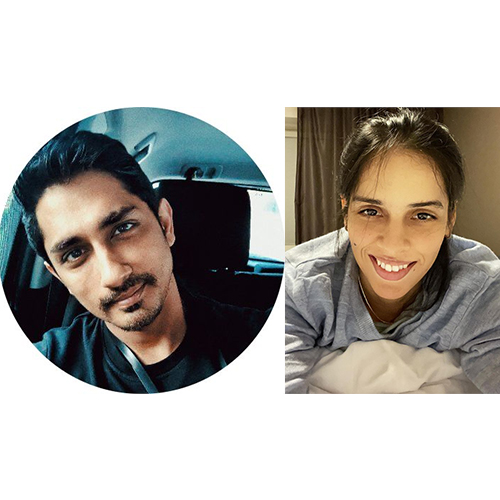 The NCW has claimed that the actorâ€™s comment has outraged the modesty of a woman.Â

As said so, Nehwal might have forgiven Siddharth for his words but, the netizens and the National Commission of Women are still not convinced with the actorâ€™s apology after him targeting women in such a manner. The NCW has claimed that the actorâ€™s comment has outraged the modesty of a woman, and is a statement that disrespects and insults the integrity of a woman. In result of which, the NCW has taken cognisance for the matter, where the chairperson, Rekha Sharma has written to the DGP of Maharshtra to immediately investigate the matter and register an FIR under the suitable provisions of the law. The matter is currently in the process.

Farhan Akhtar and Shibani Dandekar's relationship has been admired all over the media, so do their fans getting curious about their upcoming wedding. After...