Some people don’t like playing Halloween games because they start to feel childish. We get it, we really do. But there is a way to enjoy your favorite games without feeling like you’re back in elementary school. And let’s face it, this is the one time of the year you can get away with acting childish without anyone getting offended by it. But if you are still set on playing only grown-up versions of Halloween games, we got you. And for those of you wanting to throw a little toned-down, but still fun and raging Halloween party for your kids, we got you as well! Live out your Inspector Gadget dreams with an elaborate murder mystery game or satisfy your inner Blair Waldorf by turning your hallway into a runway and staging the ultimate costume contest – there is something for everybody here. So, get settled in your costume and arm yourself with these spooktastic games and you’ve got yourselves the perfect Halloween party! 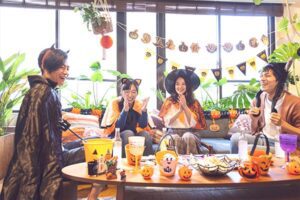 Are you a drinking game aficionado? If you just nodded yes, then you probably already know the rules for beer pong, right? Well, Eyeball pong runs on the same rules, the key difference being instead of a ball, you’ll be using an eyeball! We just made your favorite drinking game creepy enough to be Halloween-appropriate. You don’t need a lot of equipment, just plenty of beer, and get an eyeball from your nearest store and you’re all set!

2. Conjure Up Halloween Cocktails
There are countless festive Halloween cocktail recipes out there that are as terrifying as they are tasty! We’re sure you’ve tried a few yourself, right? This game can be played in two ways, both being very easy. You can ask your guests to bring their own Halloween concoction to the party and then have a competition with a couple of people as judges. The winning cocktail, of course, gets bragging rights but you can also give out candy or a brand-new bottle of whatever alcohol you like as the prize. Another way to play this game is to hold a mixing contest at the party itself. Set a timer and ask your guests to bring their ingredients from home. Whoever finishes their concoction on time qualifies for judging and then the best cocktail can get the prize.

3. The Post-It Guessing Game
It is not difficult to get your hands on a few post-it packets and the “Am I…” game is a game almost as old as time. For a Halloween-appropriate version, one person will write a Halloween-themed item on a post-it note and then stick it on another person’s forehead. Then that person will go around and ask “Am I…” type questions to guess what the item labeled on them is. Trust us, it gets hilarious really quickly! 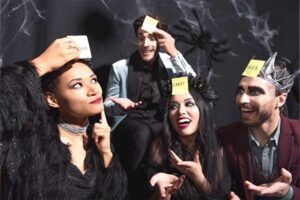 1. Marshmallows On A String
A game as entertaining as bobbing for apples, but with a sweeter prize and a process far more sanitary which is a bonus where kids are concerned. All you need to do is get a hold of a broom and make it a little witchy, or you can just use any other surface appropriate for hanging strings from. Hang marshmallows from each string and then have kids compete to eat the treats in their entirety making sure the marshmallows don’t fall on the floor. And to make it a little harder and raise the competitiveness, their hands must remain behind their backs. You can even lift and sway the broomstick to make it harder and more fun.

2. Pin The Spider On The Web
There is a reason that pin the tail on the donkey remains a classic when it comes to fun party games. This much-beloved game has undergone a variety of makeovers to make it suitable for every holiday or party, Halloween has not been exempted either. We’re sure you might have guessed how it goes, but just in case you haven’t, we’ll list the rules. Take a large printout of a spider web and stick it on a wall, there are a variety of prints available on the internet. Blindfold one child and then spin him around. Now everyone can sit back and watch as the player fumbles around, the watchers can also call out directions to the player to confuse them.

3. DIY Mummy
This one might get a little messy for you to clean up after, but plenty of fun is guaranteed. Gather up a good amount of toilet paper and the kids for this fun game. The reward goes to the mummy that is most creatively wrapped. Pair off the kids or make teams with more than 2 kids on each team. Set up a timer and ask the kids to wrap their designated “mummy.” After this, you can even host a mummy race where the children send off their newly wrapped mummy off on a race to a marked finish line. As a bonus addition, ask the last one there to smash a raw egg on their forehead as a punishment!

Ready to start planning your New Year’s Eve party? These party games will come in handy. Take a look. We live by Vern McLellan’s saying,...

While the release date for ‘Fighter’ has been postponed, here is the reveal when Deepika Padukone and Hrithik Roshan will be seen sharing the...