Londoners Are Ditching Their Pants For No Trousers Tube Ride Event

Passengers in London dressed up in only upper halves and ditched their trousers while riding the subway.

Dozens of people in London stripped down to their trousers or pants while riding on the Elizabeth line, which opened last year, for the annual “No Trousers Tube Ride” event. All the passengers were seen wearing clothes on their upper halves but only with underwear, socks and shoes, on their lower halves and ditched their pants 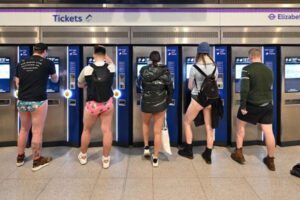 Surely, you all must be thinking about what kind of event this is and what’s the reason behind it. Don’t put too much pressure on your brain, we have answers to all your questions about the No Trousers Tube Ride event. This event started 20 years ago and is said to have begun in New York in the year 2002 by the comic performance art group called Improv Everywhere. There is no reason behind it, but a bit of fun.

They started it as a practical joke involving 7 trouser-less guys who pretended not to see one another as they boarded the train at each station for 7 consecutive stops. The Improv Everywhere group instructs the people to get up, remove their trousers and place them in their backpacks as soon as the doors at the stop ahead of theirs close. 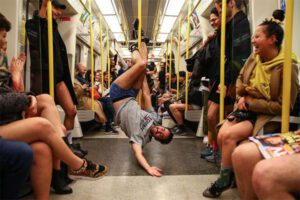 Later, it became a global event. Today, many cities in more than 60 locations across the globe host this as an annual event including London, Germany, France, Australia, Romania, Lisbon, Toronto, and Tokyo. They are back after two years with as much enthusiasm However, it had not been observed for the past 2 years owing to the Covid-19 pandemic. This year the event was organized by The Stiff Upper Lip Society. They aimed to celebrate this silliness. People bravely participated in this event and were seen casually travelling in trains.

There are two rules for anyone who is participating in this event which include not wearing any trousers on the subway and they should have a poker face while participating in the No Trouser Tube Ride event, but behaving as if it is just a normal day.

Despite playing supporting roles, these actors chose the right script and made their mark in the Entertainment industry. The fame of any movie at...

We at FHM are on a mission – a mission to help you look great! Which is why, we have some of the best...