Bollywood megastar Salman Khan turned 57 on December 27 this year. Many B-town celebs arrived in style at his sister’s home to attend a midnight birthday bash of Salman and his niece Ayat Sharma.

Bollywood superstar also known as Bhaijaan Salman Khan turned 57th this year. He celebrated his birthday at midnight and a midnight party was reportedly held at his sister Arpita Khan’s house in Mumbai. Many of his Bollywood friends and family members joined him on his special day. Many B-town stars including Shahrukh Khan attended his Dabangg bash last night. 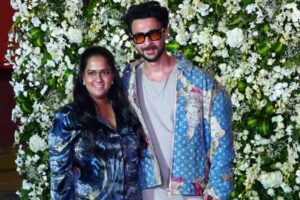 Salman Khan’s sister Arpita Khan and her actor-husband Aayush Sharma hosted a huge birthday party at their residence for Salman Khan and for their daughter Ayat Sharma, who shares her birthday with her uncle. Superstar Salman Khan made an entry at the party in an all-black outfit and looked dashing. He also cuts the cake with the paparazzi and thanks them and his fans for all the love, before heading to the party. 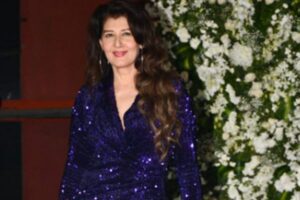 Sangeeta Bijlani made a statement in a blue glittery dress

Many Bollywood stars came in black outfits to follow the party theme. While Sangeeta Bijlani made a statement in a blue glittery dress and styled it will beige color heels and open tresses. Actress Sangeeta Bijlani is an old friend of Salman Khan. She was seen with Salman Khan outside the venue after a party. Salman came outside and gave her a warm hug and forehead kiss before dropping her off. 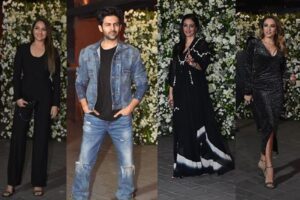 Kartik Aryan, Tabu, Sonakshi Sinha, Iulia Vantur, Suniel Shetty, Pooja Hedge, and the cutest couple of Bollywood Genelia & Riteish Deshmukh, among others were also spotted at the venue. Freddy movie star Kartik Aryan wore a blue denim jacket, with matching jeans and a black T-shirt. Actress Genelia D’Souza was seen wearing a short black and white print dress and styled it with boots, while her actor-husband Riteish Deshmukh was in an all-black fit and brown shoes.

Actress Tabu wore a black & white full-length dress while actress Sonakshi Sinha wore a black top with matching trousers and styled it with black heels and a black sling bag. Salman’s rumored girlfriend Iulia Vantur was also spotted at the venue. She looked dazzling in a shimmering black dress. Actor Suniel Shetty and closest friend of Salman also attended the party in an all-black fit. Later we spotted Pooja Hedge who arrived at the party in a casual style. She wore a white sleeveless top and baggy jeans. TV anchor Rajat Sharma and his wife Ritu Dhawan were also spotted at the venue. 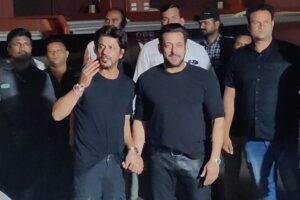 This Karan- Arjun reunion was a visual treat for their fans

The highlight of the party was the Badshah of Bollywood Shahrukh Khan’s arrival at the venue. He was the last one, who arrived at the party. This Karan- Arjun reunion was a visual treat for their fans. Shahrukh Khan follows the theme of the party and looks effortlessly dashing in a black hooded jacket, T-shirt, and matching cargo pants. He did not wait for the pics and headed straight inside the party. After a party when Salman Came outside with his closest friend Shahrukh Khan to drop him off. They posed together for the media and gave a warm hug to each other.

The pint-sized powerhouse from Canada has been setting desi screens on fire ever since her Bigg Boss debut. Here she is…served Sunny Leone side...

Long-time lovers, Sebastian Lletget and Becky G are engaged, and here is how big the ring is. Good news is in line for American Singer...