Long-time lovers, Sebastian Lletget and Becky G are engaged, and here is how big the ring is.

Good news is in line for American Singer and one of the greatest popstars Becky G, as she is now officially engaged to long-time boyfriend Sebastian Lletlet. The couple announced their engagement by posting their proposal pictures on their official Instagram accounts and looking at it, we can clearly say it was a dreamy one. We could see Becky G and Sebastian completely in love with each other in the pictures of the proposal after which, the couple also posed for a selfie together. The couple has been dating for almost 6 years now and looking at this announcement of the engagement comes as the hope for the wedding bells of this lovely pair. 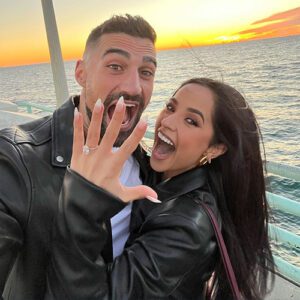 Captioning the pictures as ‘Our spot forever’, the couple could be seen in a yacht where Lletget proposed to Becky in the middle of the ocean. Lletget and the Mexican-American singer began seeing each other romantically in the year 2016. Last month, Becky and Lletget walked the red carpet together at the Latin Grammy Awards in Las Vegas, where she was nominated for best urban single for her song ‘MAMIII’ and the couple put forward their top-notch attire for the award show, which definitely turned heads. Becky has supported Lletget ever since his move from the LA Galaxy to other MLS teams including FC Dallas.

With ‘Bailé Con Mi Ex’ as a solo artist, Becky G most recently achieved her first No. 1 hit as a solo artist on the Latin Airplay chart. The song is from Esquemas, her album. The singer talked about how upset she was when she learned of her accomplishment and how loudly she screamed, waking up her lover (Lletget). 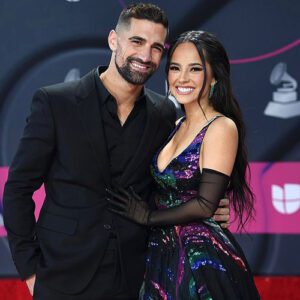 Both Becky G and Sebastian are often seen spending time together.

Both Becky G and Sebastian are often seen spending time together and sharing their love for each other on their social media handles. The pair met in June 2016 through the help of mutual friends who tried to match them to set up a date for them, and they clicked immediately away. Since then, the two have shared red carpet-appearances and have been there for each other in their most trying times. Becky G usually attends her boyfriend’s soccer matches, and Lletget is always eager to spread the word about her latest song. The distance has never been an issue for them despite having busy schedules between competing and touring. Aren’t these two giving away some major couple goals for all the love birds out there? Hell, yes! 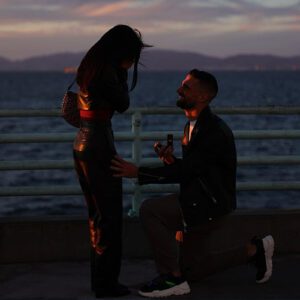 Lletget proposed to Becky in the middle of the ocean.

Looking at the exciting news that has been shared by the couple, we are just getting our ‘aww moment’ looking at the pictures and the dreamy proposal planned by Sebastian. In the dark hues of sunset along with the vibrant background of the ocean water, the mood for such a special moment seemed exemplary when Lletget went down on his knee to ask the special question to the love of his life. In the selfie shared by the couple, our popstar Becky G can be seen flaunting her massive diamond ring, which is the one to die for.

The couple looked happy as ever and we wish them the best for their future. However, now we are looking forward to the wedding announcement.

Alicia Witt’s Reveals Cause Of Death Of Her Parents

American actress Alicia Witt reveals about her Parent's death, everyone believed it to be a sudden event, or their age as Robert Witt is...

From Jennifer Lopez to Avril Lavigne, these music personalities were a treat to watch at the iHeartRadio Music Awards. Don’t miss the winners who...