In a backlash against the violence and general repulsiveness of many contemporary team sports, a group of physical educators are putting their trust in a new game which is termed Tchoukball. Yes, that spelling is correct (pronounced ‘chookball’). It is a sport developed by Dr Hermann Brandt, a Swiss biologist, in 1975. He wanted to create a sport that would reduce sport-related injuries and bellicosity between players on the court.

The name was invented from one of his treatments, where he asked his patient to throw a ball at the trampoline which bounces the ball back for the patient to catch. A ‘tchouk’ sound was made every time the ball touched the net of the trampoline.

Tchoukball is an exceptional merger of handball (playing with hands and similar boundaries around the scoring area), volleyball (preventing the opponents’ shots from touching the ground) and squash (rebounding element in the game). This excellent example of combinatorial innovation puts together elements of different well-known sports to create a sport with less or no injuries.

It is a mixed-gender, non-contact sport. There is no attacking, obstructing of players and no interceptions of passes allowed, which means that players of diverse height and build can play together without impacting their game. The key skill required to play Tchoukball is the ability to catch and throw the ball, it is thus great for hand-eye coordination and growth of transferable skills. Playing Tchoukball frequently will also lead to greater dexterity, speed, strength and reaction times.

Tchoukball is played in more than 40 nations. Countries like the United States, Great Britain, Canada, Brazil, Poland, Italy, Spain, Switzerland, Japan, China, Singapore, Taiwan, and the Philippines are all extensively participating and endorsing the sport. 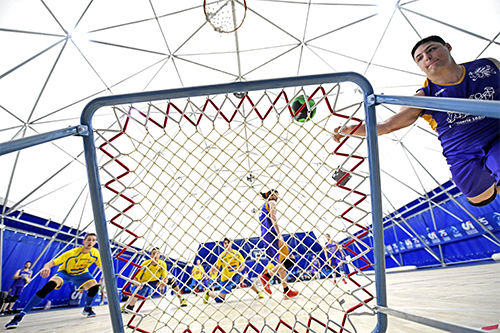 The sport is mostly played on the dimensions of a basketball court. At each end, there is a frame – just like a trampoline. There is also a semicircular D-shaped zone around the frame that players cannot enter.

The rules of Tchoukball seem complicated at first but are in fact very easy to learn. The game is played with 2 teams of 12 players on each side. Of the 12 players, 7 can be on the court at any one time. It is interesting to note that both teams can score at either end of the pitch, meaning a team formation includes attackers and defenders at both ends of the playing area. For a team to score a point, the ball must be thrown by an attacking player, should hit the frame and bounce outside the ‘D’ without being caught by the defending team.

Physical contact is not permitted, and defenders may not try to stop the attacking team’s passes. Players may take three steps with the ball and can hold the ball for three seconds only. Teams are not allowed to pass the ball more than three times before shooting at the frame.

Tchoukball is played in more than 40 nations.

Scoring: You score a point if you bounce the ball off the rebound surface without being caught by the opponent team before it touches the floor.

You give a point to the other team if:

Penalties: You commit a penalty if:

There are a lot of rules in cricket apart from the basic ones, and there are some which might be too complex to understand...

Singer and Bigg Boss OTT fame Millind Gaba and girlfriend Pria Beniwal are married and here are the details about the grand wedding that...

Met Gala 2022: Here Is What Celebrities Wore and Made Our Head Turn!

Met Gala 2022 event and their glamorous outfits, know who wore what, right here!Grand fashion event of “Met Gala” 2022, is back! Over the...