The Kapoors clan had gathered at Kunal Kapoor’s home for their annual Christmas lunch. Suhana Khan was also seen at the venue with Agastya and Navya Naveli Nanda.

Christmas is that time of year when the Kapoors clan reunited to celebrate the occasion and had lunch together. The annual Christmas lunch is a long-standing tradition in Kapoors. The late actor Shashi Kapoor hosted grand lunch parties every year at his house, after his death, his son Kunal Kapoor kept up with the tradition and hosted a Christmas lunch at his place in Mumbai. Karisma Kapoor with her children Kiaan Kapoor, and Samaria Kapoor, Ranbir with Alia, Shweta Bachchan, Navya, and Agastya with Suhana Khan, and Neetu Kapoor, among other Kapoors, were seen at the venue. Kareena Kapoor Khan was missing from the scene. 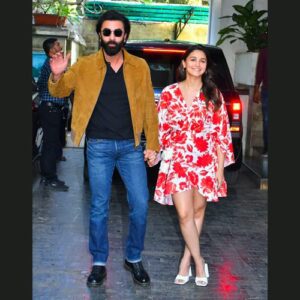 For the occasion, new parents Ranbir Kapoor and Alia Bhatt were the first ones to come to the lunch party. They were seen together holding hands and posing for the paparazzi. Ranbir looked handsome with a heavy beard look and he wore a black T-shirt, a brown jacket, and blue denim. while Alia wore a red floral-print wrap-around dress and styled it with white chunky heels. 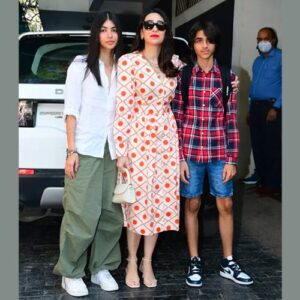 Karisma Kapoor arrived at the venue with her children, Kiaan, and Samaria

Karisma Kapoor wore an off-white dress with a red polka dot print and beige heels, which she accessorized with gold jewelry and left her hair open. She arrived at the venue with her children, Kiaan, and Samaria. The trio posed together for the picture. 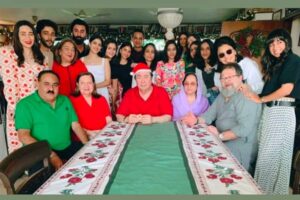 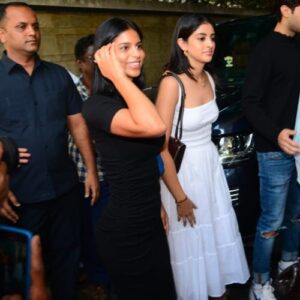 This year, the highlight of the party was actor Shahrukh Khan’s daughter Suhana Khan, who arrived at Kunal Kapoor’s house for a lunch party with her movie co-star Agastya Nanda, with his mom Shweta Bachchan, and his sister Navya Nanda. All four of them were photographed by the media as they stepped out of the car. Shweta Bachchan wore casuals, while her daughter Navya Naveli Nanda wore a long white gown, which she accessorized with a brown bag and completed with beige-colored heels. Agastya and his co-star Suhana Khan twinned in black. Agastya looked effortlessly handsome in a black sweatshirt and blue denim, and his co-star and friend Suhana Khan dressed in a black body-con midi dress, styled it with a pair of heels, open tresses, and carried a blue designer handbag.

Suhana Khan and Agastya are set to make their Bollywood debut with Zoya Akhtar’s film ‘The Archies.” It also stars Khushi Kapoor, and Yuvraj Menda, among others. It is an Indian adaptation of The Archies comics. This movie will be released on Netflix.

The actress Kareena Kapoor Khan, her husband, and her kids, Taimur and Jeh, were missing from the venue. It seems like they have not returned from their vacation. They had traveled to another country to celebrate his elder son Taimur’s sixth birthday. Kareena Kapoor Khan took to Instagram to share a video of Saif Ali Khan playing the guitar on the occasion of Christmas.

Karan Johar always brings big or upcoming stars from the film industry to his famous talk show, Koffee With Karan but this year we...

As traveling is currently off the table due to the pandemic situation, it is a good idea to utilize this time in mulling over...