Bollywood’s most popular couple Ranbir Kapoor and Alia Bhatt looked simple yet stylish when they appeared at an event in Mumbai.

The most adored couple in B-town and newly become parents Ranbir Kapoor – Alia Bhatt attended an event at the Mumbai Press Club on Wednesday. The duo took some time off from parenting duties and stepped out in a bay dressed in stylish ensembles to make an appearance on the occasion. They were posed for paparazzi in a room filled with memorable pictures of theirs. 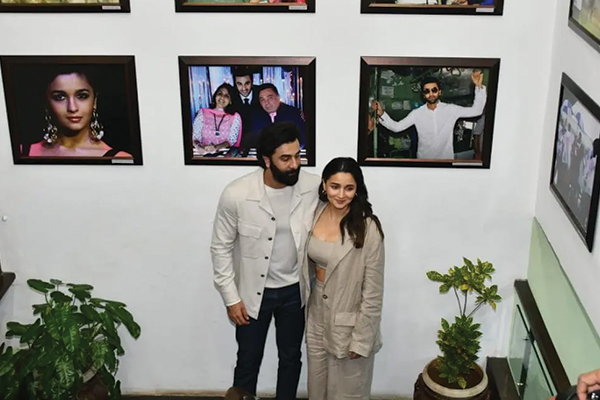 They were posed for paparazzi in a room filled with memorable pictures of theirs.

The couple attended the event at the Mumbai Press Club to launch a calendar “Mumbai Moments 2023” and inaugurated the photo exhibition. They were seen admiring the several photos framed on the wall, including one of Ranbir Kapoor’s parents – actress Neetu Kapoor and Late actor Rishi Kapoor and another one from their wedding and when they shooting for Bhramastra. They also posed with one of the photos of Alia during her movie Gangubai Kathiwadi’s promotion. They were all smiles as they pointed at the picture. They pointed few more pictures featuring the couple and talked with each other as well as the people around them. 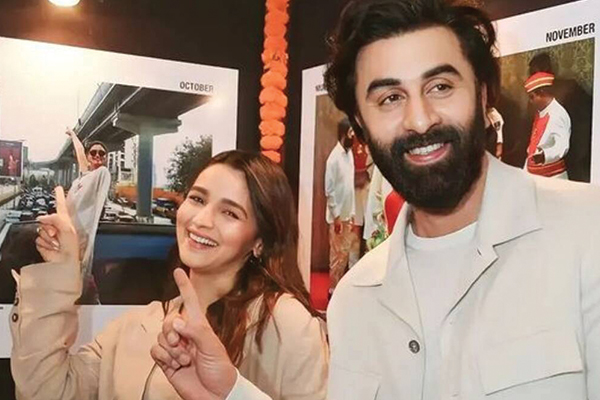 As they climbed up the staircase, the couple stopped for a moment in front of a famous photo that featured, Ranbir Kapoor, Alia Bhatt and Katrina Kaif at the Filmfare awards in 2019. In the photo, Katrina Kaif bumped into Alia and Ranbir and interacted with them nicely. 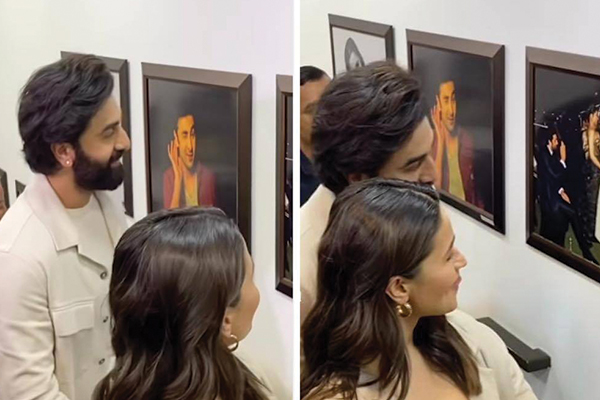 The couple stopped for a moment in front of a famous photo that featured, Ranbir Kapoor, Alia Bhatt and Katrina Kaif interacting with each other.

Their fans go gaga over them every time the duo is spotted together. Earlier they were spotted watching a football match together at the stadium. The match was between Kerala Blasters and Mumbai City FC in the Indian Super League. Their photos went viral in no time on social media.

Ranbir Kapoor and Alia Bhatt Outfit for the Occasion:

The couple chooses chic outfits for the event. While heartthrob Ranbir Kapoor was seen wearing a white round-neck tee, matching jacket and dark blue denim jeans styled with white sneakers, back swept hairdo and a heavy beard look. Alia Bhatt complimented him in a beige-colour powersuit with a matching crop bralette makes a strong monotone fashion statement. Her bralette has a scoop neckline and midriff cropped hem length and style it with notch lapel collars, a full-length sleeves blazer, and a loose silhouette. And rounded off the outfit with matching coloured pants featuring a flared fitting & high-rise waistline 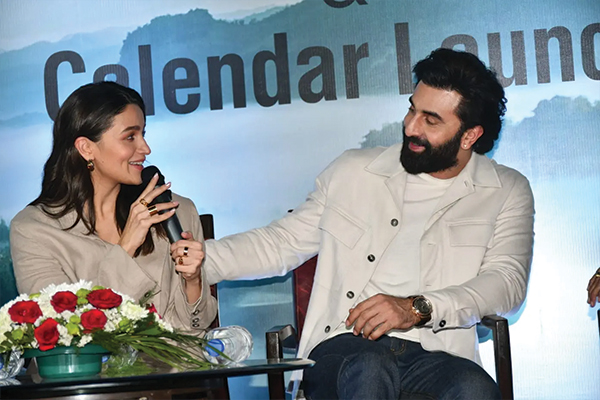 The couple chooses chic outfits for the event

Ranbir Kapoor was last seen in Shamshera directed by Karan Malhotra and currently gearing up for his upcoming film “Tu Jhooti Main Makkar” opposite Sharddha Kapoor directed by Luv Ranjan, which will be released in theatres on 8 March 2023 and Sandeep Reddy Vanga’s “Animal” opposite Rashmika Mandana.

On the other hand, Alia Bhatt will be next seen in her Hollywood debut movie “Heart of Stone” directed by Tom Harper and Karan Johar’s next “Rocky Aur Rani ki Prem Kahani” opposite Ranveer Singh, which will hit theatres on 28 April 2023 and also has Farhan Akhtar directorial “Jee Le Zara” opposite Katrina Kaif and Priyanka Chopra.