Selena Gomez And Drew Taggart Are The New Couple In Town

We Can’t ‘Calm Down’ Because It Seems Like Selena Gomez Has Found Her Lover In Drew Taggart.

American singer and gorgeous actress Selena Gomez is making headlines these days and that too for a number of reasons. We all have heard and loved the addictive music that she made originates but this time, the American superstar is falling in love with someone special. Yes, we have lovely news for all Hollywood fans out there, as it looks like we now have a new couple in town. 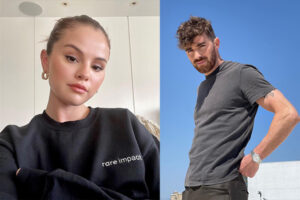 Gomez and Taggart aren’t yet seriously dating, but they are okay with the public seeing them being affectionate.

The beginning of Selena Gomez’s new year includes a hint of romance. Gomez was unmarried and open to dating less than a month ago, but multiple sources claim that she and The Chainsmokers’ Drew Taggart are now dating. According to sources, Gomez and Taggart aren’t yet seriously dating, but they are okay with the public seeing them being affectionate. The sources have also added that the duo is not trying to hide what they feel for each other, but are very casual with this newly found love. Well, it seems like Selena and Drew are taking it slow.

The rumoured couple were seen spending some quality time together sneaking around at the ‘only members clubs’. Selena, 30, and Taggart, 33, were spotted enjoying a cute date in public, where they were seen having fun at the movies and bowling. 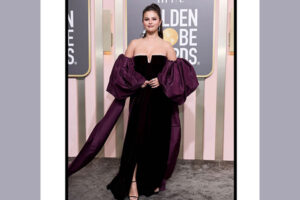 Selena was spotted in a velvet Valentino gown with enormous purple sleeves at the Golden Globes recently.

According to the sources, Taggart and Eve Jobs recently took a divorce, and it was a cordial breakup as reportedly, both of them decided to part ways on a friendly note. He was said to have travelled with Jobs on New Year’s Eve earlier this month. The 24-year-old model even seemed to wish Taggart a ‘happy birthday lover’ on Instagram. Although there have been several rumours about Sel dating every other guy in the industry, looks like this time Selena’s ‘heart wants what it wants’. As per an eyewitness who reported to a prestigious publication, the two love birds were seen making out like kids while they were on their date. 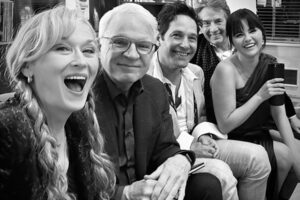 Selena is back at work as she announced the making of season 3 of the tv show ‘Only Murderers in the Building’ with an Instagram post.

In the recent event of one of the most prestigious awards, Golden Globes 2023, Selena was seen gracing the ramp looking stunning as always. For the outfit this time Gomez was spotted with a tousled high ponytail, De Beers platinum diamond jewellery, and a velvet Valentino gown with enormous purple sleeves. The theatrical garment had a youthful edge. Gracie, Gomez’s nine-year-old sister, was by her side as she accepted her nomination for best actress in a comedy or musical series for her work in Only Murders in the Building. Nothing could spoil Gomez’s evening with her sister at her side.

Apart from her personal life, Selena is rocking at her work front as she recently announced the making of season 3 of the tv show ‘Only Murderers in the Building’, as she shared a video on her Instagram handle with the new cast of the show.

Their mental health and addiction robbed them of their lives and moments and led some to death. Bollywood has always looked glamorous. But in every...

After IPL 2022 ended, Virat Kohli and Anushka Sharma went to Maldives for a short vacation from where he tested positive for Covid 19After...

Drishyam 2 is set to release in mid-november as Ajay Devgan’s character’s case is set to be reopened and this time it has more...