A great spectacle of football from a neutral fan’s point of view which ended in a fairytale ending for one of the greatest footballing personalities, Messi.

Just two years back, Messi didn’t have any international trophies and just an Olympic gold medal for his country. Simply one of the greatest players to have ever graced our beautiful game, didn’t have any trophies for his country. Two years later, he has both the Copa America and the FIFA World Cup trophy to his name. He led the side from the front and scored in all the knockout games in this competition. He carried this team for many years and played alongside some of the greatest players and he lifted the trophy with some of his best mates. For many supporters, Messi’s victory over the greatest trophy that had escaped him during his whole career also marks the end of the G.O.A.T. (greatest of all time) discussion. He was unquestionably one of the finest players who ever played the game, but his career was frequently criticized for having a hole the size of a FIFA World Cup trophy in his trophy case. no longer. Messi has led his football-obsessed nation to the top of the international game, much like his footballing forerunner, Diego Maradona. This World Cup victory is the perfect cap to a storied career for Messi. His argument for being the greatest player to ever play the game is now solidified by the completion of his trophy cabinet. 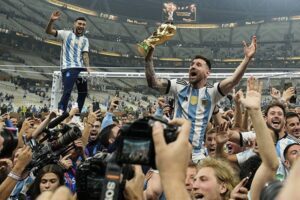 Mbappe was on the losing side at the World Cup final despite scoring a wonderful hat-trick. Even though people might claim that two of his goals were from the penalty spot, he still had the composure to finish all three penalties (one in normal time, one in extra time, one in the penalty shootout). Due to his numerous goals during the competition, Mbappe was given the golden boot award. The final Frenchman to take the podium during the medal ceremony was Kylian Mbappé. The silver medal over his neck was merely a token, and the Golden Boot he was holding was worthless. Only one other individual had ever accomplished what Mbappé had done was that he scored a hat-trick in the World Cup final. As a result, he shared a tie with Pele for 12 World Cup goals. Mbappe  seemed poised to alter the course of Qatar 2022. Prior to being involved twice in the last ten minutes through his team, France had never contributed. All of that incredible splendor, though, was insufficient. 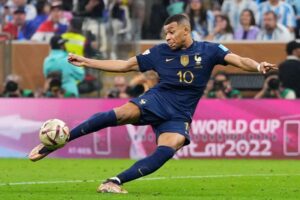 Speaking more generally about this historical encounter, Lionel Messi gave his country the lead at the midpoint through the first half by skillfully converting his penalty after Ousmane Dembele’s foul on Angel Di Maria. In a first half that was dominated by the South Americans, Di Maria was at the centre of several moves, and the 34-year-old rapidly doubled their lead after a well-executed counterattack. France appeared to lack confidence on the ball and to be out of the game altogether. They were unable to control the possession, and even when they did have the ball, they failed to create clear-cut chances for the team. Following the break, Didier Deschamps sought to inspire some confidence in his team, however it wasn’t until the 80th minute that things started to change. Before extra time, Kylian Mbappe scored twice in less than two minutes to tie the score for Les Bleus and leave La Albiceleste speechless. Following a thrilling extratime session, where Messi and Mbappe once more exchanged goals to force a memorable contest into penalty kicks. Emiliano Martinez made the save of the tournament that not only he but millions of supporters around the world would cherish for a long time. Substitute Kolo Muani missed a 1v1 chance in the dying seconds of the second half of extra time. The outstretched legs of Martinez came in at the right time to stop France from winning back to back World Cup Titles. 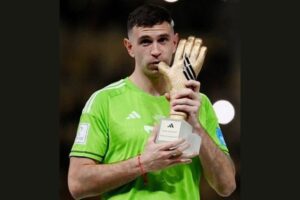 In the penalty shootout, it was anyone’s game but with the mindset Martinez has during penalties is simple mind-boggling. Martinez saved the second penalty shot by Coman after the first one by Mbappe went in. He then danced as the young Tchouameni dragged his penalty wide. It was all on the young Sevilla right back Montiel to score the decisive penalty and he placed it immensely as bursted into tears as soon as he realized it went in and Argentina had won the World Cup. When the opportunity presented itself, Lionel Messi got to his knees and bowed his head. While the majority of his teammates had already left to celebrate, Messi remained at the midway point, overcome by both weariness and emotion after the breathless, riveting, and unbelievable World Cup final. For the very first time since 1986, a year before Messi was born, Argentina is the world champion. It is the pinnacle of an incredible career that has never lacked ornamentation at the age of 35. Because he believed he owed it to himself and his nation, Messi was driven to achieve success at the World Cup. 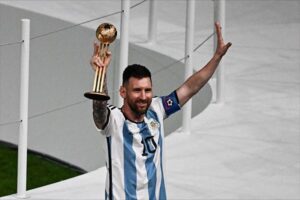 Lionel Messi and Kylian Mbappe were naturally the topics of conversation leading up to Sunday’s spectacular World Cup final between Argentina and France, but by the time it was over, Emiliano Martinez was also a household name. This Argentina side had great players in almost every position and the unified nature of the team was showcased on the biggest stage of them all. They have every right to rejoice this beautiful moment that has been written in history. For Messi, he has achieved almost everything there was in football and showed why he is one of the greatest players of all-time.

Tripods and cameras go hand-in-hand. So, to complement your expensive new camera, we have some amazing tripods for You. Read on to know our...

Set to stream on Disney+ Hotstar, Koffee With Karan is coming with its Season 7 with some scandalous entertainment.With some hot coffee and gossip...

Femmes Collection Available on FHMax To Say A Proper Good-Bye To Summer SeasonFall has entered the room and the summer season is packing up...

5 Excellent Queer Movies That You Must Watch In Pride Month

You will be surprised with these queer movie collections; pride month is already here. Check out this recommended movie list!There is no end to...