The pint-sized powerhouse from Canada has been setting desi screens on fire ever since her Bigg Boss debut. Here she is…served Sunny Leone side up!

When we decided to splash this doubly twisted cocktail of an issue with some hot Tabasco, there was little doubt about who’d play the paprika. Karenjeet, Karen or Sunny, as the world knows her, was just as excited to break the stereotype and experiment with a feisty fighter look on her as we were. And sweet mother of Jesus, did she pull it off! The shoot was way beyond the usual make-up-costume-click routine; it almost felt like she was auditioning for the next Kill Bill. We’re sure you’ll find out what we’re talking about in the next 10 pages. Post the shoot, the conversation was as interesting as each frame captured. She did warn me, however, of dire implications if I dispelled any secrets from Season 6 of Game of Thrones, which she plans to binge watch once all the episodes are out. I obviously complied. Who’d want to test the wrath of a sexy samurai?

FHM: You stay busy, and I’m guessing, a lot. What’s a regular, work-free evening like for you?

Sunny Leone: Even on regular work-free evenings there is still some work to be done. But eventually I have my dinner and maybe watch some of my favourite shows. I sleep pretty early because I get up very early.

Wow… It’s been ages that I saw the 6 o’clock sunrise.

(Laughs). The only way I can stay fit is if I get up early, stay in the gym, drink lots of water, and eat as healthy as possible. I workout before my schedule starts for the day.

I really liked the fighter concept. There is the Taekwondo look and also the samurai for which I had a blonde look for the first time.

I picked my name long back when I entered entertainment. I was asked, ‘Hey, what do you want your name to be?’ (Laughs) And I don’t know why but I picked Sunny, which happens to be my father’s nickname. If I knew how it was gonna be, probably I would have chosen something different at that moment. But if we had hindsight we’d all be millionaires (laughs). 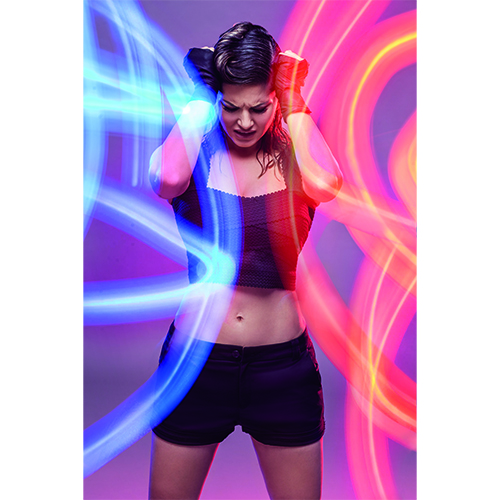 I knew how it was gonna be, probably I would have chosen something different at that moment.

If you have the gift of going back and change it again, what would the name be now?

I would have kept my real name – Karenjeet or Karen. But Sunny has created a brand now, so I’m happy with it. My closest friends and family still call me Karanjeet or Karen.

We have the second line of perfumes coming out. So, we’re gonna see a lot of merchandising this year. And now that we have the ball rolling, I want to continue on this path and keep building this merchandising brand. Also, I have the Teen Patti brand, which is ongoing. Then there’s this movie coming out in May… a role that I haven’t experimented in before. So, it should be interesting to see people’s take on these types of roles. And oh, Splitsvilla.

You’re quite a business person. When was the first time you made some money?

I had my first job when I was probably about six or seven. I made my own lemonade standin front of my house. I grabbed my brother and another neighbour after a snowstorm and said, ‘Ok, we’re gonna make some money after the snow.’

What part of your personality are you most proud of?

My adaptation skills. Meaning to adjust as much as possible to the unknown. 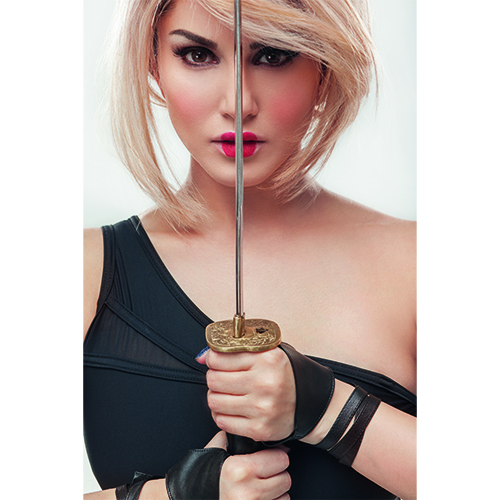 Meaning to adjust as much as possible to the unknown.

Personally, I love it when you speak Hindi. Is it owing to this skill of adaptability or your family?

My parents spoke Punjabi and watched Hindi films when I was growing up. So, I always understood… in fact, I still understand Punjabi. But there’s no one in my team who speaks it, otherwise it would come back really quickly. For Hindi, I have a lot of people around to practice with.

And how about physical attributes? What’s your sexiest physical feature?

I’m a girl, so I’m gonna say my smile (laughs). I have no idea what people find sexy and say something like, ‘Oh my gosh, I find that really sexy!’ (laughs).

Umm… you know, I get a mix of so many different things. It depends on people’s prerogative of what they find crazy. I’ve been offered roles with space and robots; horror type characters; a nun…

Yeah… I don’t think that would have worked out so well. It wouldn’t really be believable (laughs).

Tell us something about your growing up years.

I grew up in a typical Punjabi family. My parents cooked Indian food, Sunday through Thursday. Friday and Saturday would be movie nights at home. I ate sabzi, roti, dal. The dish that I hated the most was saag. I don’t know any child who says that’s their favourite (laughs). I loved aloo ke paranthey, while growing up, or gobi wale paranthey or muli wale paranthey… whatever my mother cooked. I played with G. I. Joes instead of Barbie, and built forts rather than castles. I was that little annoying child of the neighbourhood who went door-to-door to raise money for the soccer team or the basketball team, selling something. I was part of a group called FBOA, which is Future Business Leaders Of America in high school (laughs). Very dorky, I know (laughs). 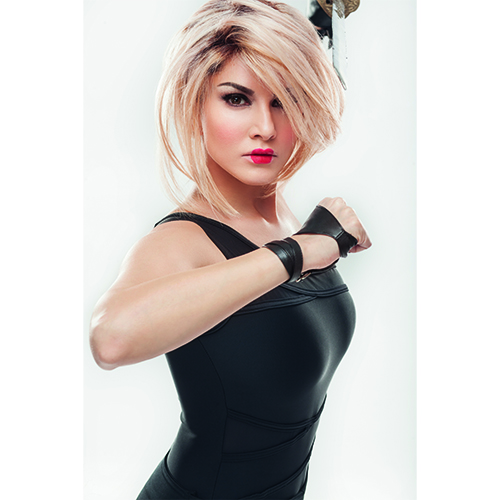 I was part of a group called FBOA, which is Future Business Leaders Of America in high school

It is hard to believe that you were a dork.

I was not a cool kid… I was a dork. You know how in school there are girls who have their hair done pretty and always smell great. I was a kid that smelt like aloo ke paranthey.

Hahaha. Do you have a short temper?

No, I have a very calm personality. It takes a lot for me to yell at somebody. There are a very few people that I have yelled at… my brother and my husband. But we yell at eachother, so it’s OK (laughs)… always in a good way.

I love guava juice and passion fruit juice. In alcoholic drinks I love Grey Goose Martini, not too dirty… and with two olives.

Five things that men should do to get your attention…

Umm… be yourself; don’t wear a lot of cologne, so much that I can smell it from across the room; don’t be over confident,
but be sure of yourself; be physically fit; and guys who love their mothers.

Five things that turn you off…

All of the above but opposite. Besides that, a guy who doesn’t have his own style or identity. One who just goes with the flow and buys everything that his girlfriend picks for him. I hope it doesn’t happen with you. 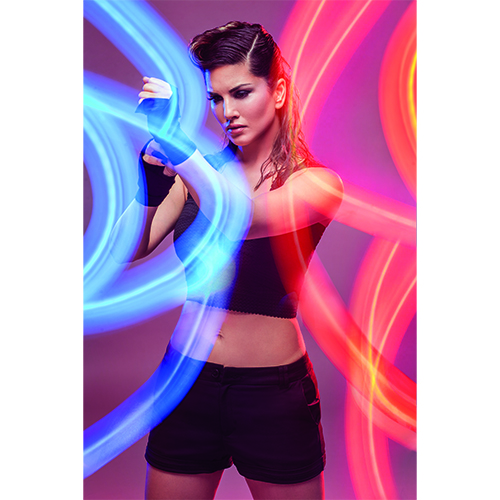 One who just goes with the flow and buys everything that his girlfriend picks for him.

(Laughs). Good, good… I’m so happy you pick your own clothes. There’s a difference between someone helping you with fashion and mommy packing your bags with her choice.

Is there a phobia or fear that you’d like to conquer?

Machhars. I hate machhars and flies because they bite my face.

One of the first things people learn in a new language are the cuss words. What all have you learnt in Hindi?

I don’t know if I can repeat them out loud (laughs). I say teri toh and I just stop. Ya, I also say bhains ki koni… buffalo’s elbow.

Do you have a tattoo?

No, I don’t. I did have an urge for it after my mother passed away and I told my father that. He said OK and disappeared for an hour and came back downstairs with my mother’s name written properly in Gurumukhi. It was very cute. I never got it done, though.

What do you prefer, cars or bikes?

Cars. I drive a Maserati in the US that I love. 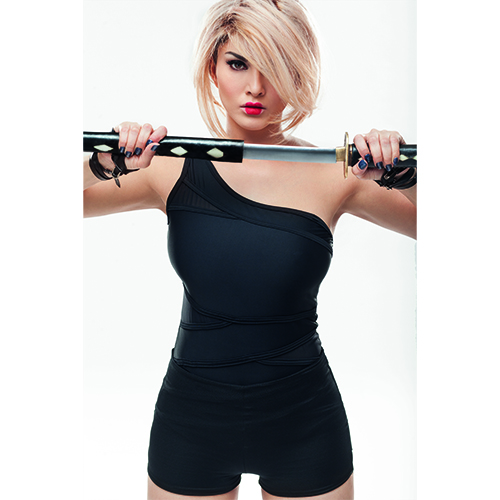 Cars. I drive a Maserati in the US that I love.

Do you have a hobby?

When I’m in the US, I make large abstract paintings, in free time. I just finished a really large abstract dragon for my dining room. I also crotchet. It’s very dorky (laughs). Then I play video games a lot… not those cool ones, but on my phone.

If you were stranded on an island, what are the five things, including a man (with an exception of Daniel) that you’d like to have with you?

I would like to have a knife; one of those clicky fire things to create fire; my phone to play games; a tent and a water filter (laughs). Oh, I’d also want a generator (laughs). And as for the guy… I’d want the winner of Dirtiest Jobs because he’d be able to fix things for me on the island. 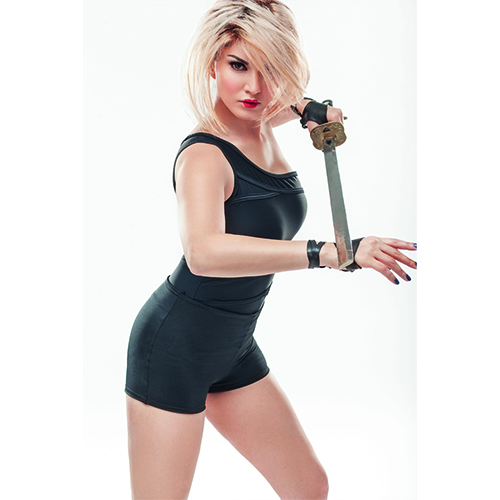 And as for the guy… I’d want the winner of Dirtiest Jobs because he’d be able to fix things for me on the island.

With the men's beauty industry on its way up, the market is getting flooded with innumerable products to help them look all the more...

Are you the one who likes to add cheese in literally anything you’re eating? Well, then you just might find yourself having a cheese-gasm...

We will look back at some of the most important knocks by Virat Kohli who turns 34 today One of cricket's all-time great batsmen, former...