Sidharth Malhotra and Rashmika Mandana will be seen sharing the screen in ‘Mission Majnu’ for the first time. Here’s all you need to know about the teaser.

Making it a good end of 2022 for all Bollywood fans as the teaser of one of the most anticipated movies is here. Yes, we are talking about Sidharth Malhotra’s upcoming movie. The movie which is packed with lots of action-thriller flavors is produced by Ronnie Screwvala, Amar Butala, and Garima Mehta and directed by Shantanu Bagchi. Mission Majnu is based on real-life events that will portray the story of one of India’s most significant missions and a soldier who gave his everything for the sake of his nation. Kumud Mishra, Parmeet Sethi, Sharib Hashmi, Mir Sarwar, and Zakir Hussain will also be seen in the movie playing some interesting characters. 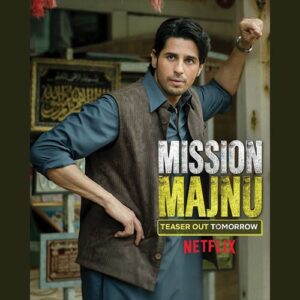 When it comes to releasing, the movie seems to be skipping a theatrical release as it is set to debut on one of the greatest streaming platforms Netflix on January 20, 2023. However, when Sidharth Malhotra shared the teaser of the movie, many fans commented that this movie deserved a release on the big screens. Our Kukkad kamal Siddy boy was last seen in ‘Thank God, which was released around the time of Diwali. Internet users, however, Bollywood buffs are still not able to get enough of Sid’s portrayal as Shershah and his on-screen chemistry with Kiara Advani, who is also his rumored lady love. Rashmika, who is still referred to as the Pushpa’ girl since her role in the Telugu hit with Allu Arjun, so it would be quite an interesting scene to see this new Bollywood pair on the big screen.

Today marks the release of Mission Majnu’s teaser by the film’s creators. The Student of the Year actor will play the part of a RAW agent in the movie, and Rashmika will portray a Pakistani Muslim girl. This is Rashmika’s second Bollywood film after Vikas Bahl’s Goodbye, and Sidharth is making his first-ever espionage appearance. We could see glimpses and bits of the movie in the Instagram stories of Sidharth and Rashmika, as they shared little details and snaps from their shooting sets with their fans. 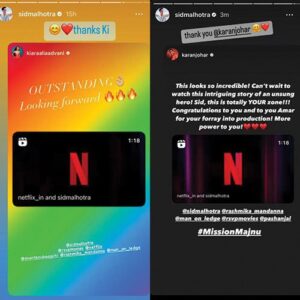 ‘Ki’ aka Kiara Advani and Karan Johar praised the teaser on their social media.

The action-packed trailer of Mission Majnu teaser has already created quite a buzz on the internet, and it appears that Kiara Advani is also very pleased with it, and it is quite obvious why. The actress expressed her happiness in her Instagram story. Sidharrumoreda’s rumored boyfriend also replied quickly to her post in the meantime. Kiara called the teaser outstanding in the comments.

Sidharth and Kiara who met on the sets of Shershah reportedly started dating each other during the shoot of the film as they fell in love with each other. It wouldn’t be unfair to say that we all would love to see this reel and real-life pair on the screen yet again. Their chemistry in the movie created magic. 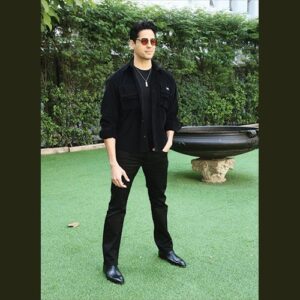 Mission Majnu stars Rashmika Mandanna and Sidharth Malhotra flew to Delhi for a promotional event for their film. The two were photographed while smiling at the camera. Sidharth Malhotra wascolored in all one colour and looked dashing as ever. He was dressed in a black denim jacket, black jeans, and a black t-shirt. He added a chain and sunglasses as accessories. On the other hand, Rashmika went for a bright look and selected a tie-dyed blue and white matching set. She accessorized with golden earrings and kept her hair in a bun.

Met Gala 2022: Here Is What Celebrities Wore and Made Our Head Turn!

Met Gala 2022 event and their glamorous outfits, know who wore what, right here!Grand fashion event of “Met Gala” 2022, is back! Over the...

With her picture-perfect physique and charming smile, Kriti Sanon left us mesmerised in this photo shoot. Her lustrous eyes were evident though the water...