In Big Boss 15, contestants Shamita Shetty and Tejasswi Prakash were almost seen in a clash conflict, but it was not limited to the show. As black windows actress Shamita Shetty’s birthday bash took place on 2 nd February, Shilpa Shetty invited most of the big boss contestants except tejaswi and Karan to the birthday bash. To know what happened exactly, keep on reading!

Shilpa Shetty’s elder sister hosts a party for her younger sister Shamita Shetty, though we are expecting the big boss contestant to be there in the party. But, a recent video of Shilpa reacting to the incident of her sister called Aunty which surfaced in the media, made our assumption proof.

As in one of the big boss tasks when the press people came to vote, they asked every contestant to do a task in which Karan got the message from tejasswi Prakash on his back. But, after that Shamita was called by Karan to do the message, then Tejasswi pushed her aside. Though this conflict has been part of the big boss clash between these two, the fight got risen when she made a remark on Shamita as Aunty and it displeased her family.

Shilpa was asked and said if Shamita looked like an aunty? Mera yeh manana hai, jab Ek aurat dusri aurat ko neecha dikhane ki koshish kare, woh meri Behen ho ya koi aur ho, that is a sign of weakness aur main us cheez ko Kabhi support nahi karungi (I believe that when a woman tried to show another woman in poor light, whether it is my sister or someone else, it’s a sign of weakness and I will never support it)

She said that without any bias, she did not like the tejaswi comment at all. Aur jis tareeke se uss cheez ko bola Gaya, main use sakht khilaaf hoon (The way it was said, I am completely against it). I just think it boils down to manners. Hum aisi cheezein karenge hi nahi (Shamita and I will never say such a thing). My parents were very strict with us, she said. 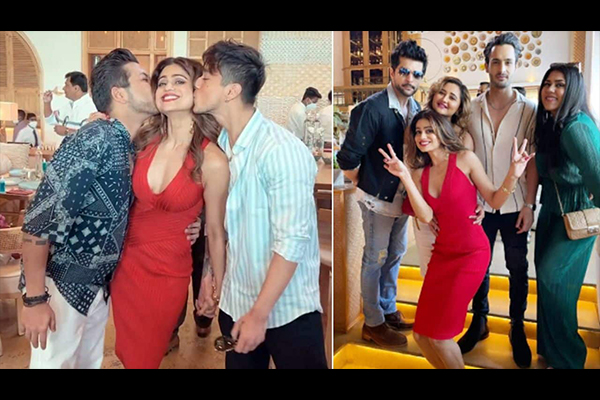 Though some fans reacted as well and said At least it has cleared properly that Teja who is more jealous and never wants anyone ahead. Shamita has talked positively to her many times, But she always takes that in a negative sense. It just she thought how someone could be better than Teja. It is better Shamita realized that Teja has crossed the line.

Other fans said Teja is so jealous of shamita. Every time she does this with her because she thinks Shamita is beautiful and famous and so she does this all out of jealousy? She wants to prove to the audience that she is younger than Shamita and beautiful to criticize her age every time. She is so jealous that she has gone out of her mind.

As the pictures of Shamita’s birthday are out, we were able to spot Nishant, Prateek, akasha, Rakhi, and even Jay, most of the big boss contestants were seen at the party, except Tejasswi and Karan who was not invited. This clash between Tejasswi and Shamita is relevant, and the reason behind not inviting her to the shamita bash is revealed.

Still Struggling to buy a holiday gift for your girlfriend? Explore these options from FHMax

We have put together the best gifting accessories that you can gift to the girl close to your heart. Have a look and pick...

Red-flag in this generation is easy to spot, do you have any red-flags in your relationship, find out here!Relationships are always known to be...

Keeping Your Styling Needs in Mind, We Thought This Time You Require Shirts, and We Are at the Rescue. Therefore, We Have Brought One...