While writing ‘With much sadness but without regret, I say this with a heavy heart: I am retiring from the Indian domestic (first class and all formats) cricket’, S Sreesanth concluded his 25-year journey of cricket. Have a look at it.

The winner of the 2011 ICC World Cup, S Sreesanth has recently announced his retirement and we all are aware of his controversial journey in the world of cricket. A bouncer that could hit the stumps of some of the best batsmen globally, there are not just one but many deliveries by this pacer that showcased the massive skills and potential of this player in international cricket. But unfortunately, the controversies in his life garnered more attention than the skills of this cricketer.

Tweeting in an official statement about his retirement from the world of cricket, Sreesanth wrote ‘Today is a difficult day for me, but it is also a day of reflection and gratitude. Playing for ECC, Ernakulam district varies different League and tournament teams, Kerala state cricket association, BCCI, Warwickshire County cricket team, Indian airlines cricket team, BCCI, and ICC has been a tremendous honour. During my 25 years career as a Cricket player, I’ve always pursued success and winning cricket games, while preparing and training with the highest standards of competition, passion and perseverance. It has been an honour to represent my family.’ 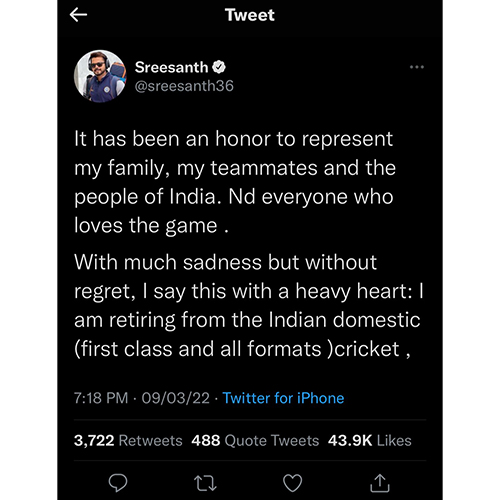 Cricket S Sreesanth tweeted the announcement of his retirement.

The cricketer has represented the nation on international as well as domestic ground in 53 One Day Innings (ODI), 27 tests and 10 T20s. Sreesanth was also a part of the Indian Cricket Team that won the 2007 ICC World Cup T20. Although these were not his only achievements in his 25 years of career, they were the controversies that dragged him into a bad image even after being a gem of a player for the country.

The slap-gate that took place between Sreesanth and Harbhajan Singh became the talk of the town at that time, in 2008 during the Indian Premier League. Although it was Singh, the then Mumbai Indian’s captain who famously slapped the fast bowler Sreesanth in the field, who belonged to the Punjab team, the cameras clearly captured Sreesanth crying later in the game. This incident was a lot talked about after the IPL. 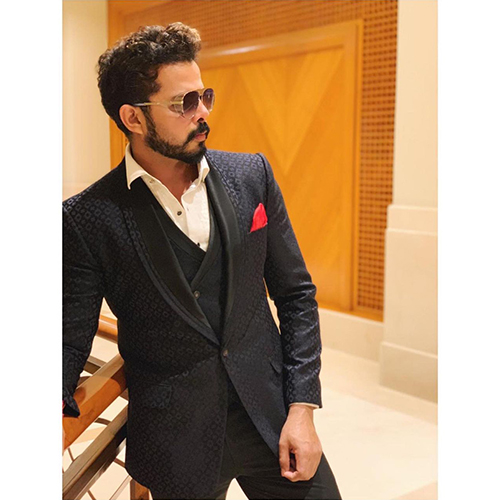 Sreesanth was banned for a lifetime by the Board of Control for Cricket in India (BCCI) in August 2013.

On October 25, 2006, S Sreesanth made his international debut against the team of Sri Lanka at Nagpur. The player went on and won the introductory T20 World Cup in the year 2007 and the player was undoubtedly good at his game, but unfortunately, fate had other plans.

Sreesanth was banned for a lifetime by the Board of Control for Cricket in India (BCCI) in August 2013 for indulging in alleged spot-fixing in the game of Indian Premier League (IPL) that year, when he was a part of the Rajasthan Royals team. Ajit Chandila and Ankeet Chavan, who were Sree’s teammates were also banned for the same allegation. Following the ban, which was later reduced to 7 years, the player made a comeback in the year 2019, after being named in the 20-member squad for Syed Mushtaq Ali Trophy in 2021 for Kerala Cricket Association (KCA).

Some Unpopular Casino Games To Know About, Tap Here

If You’re a Hardcore Gambler and Wish to Try Much More Than the Basic Casino Games, Then Here’s a List My Friend. It’s Time...

India versus Pakistan is one of the biggest matches in any sport, but when it comes to cricket, the anticipation among the fans is...