This year we are not the only ones celebrating FHM’s 15th anniversary; Utrecht also celebrated its 900th birthday anniversary of acquiring city rights.

On 2nd June 1122, Emperor Henry V granted city rights to Utrecht and its residents, and it became an official city – one of the very first cities in the Netherlands. The city is very proudly celebrating 600 events between City Day on 2 June 2022 and St. Martin’s Day on 11 November 2022. As the previous month, we had celebrated our 15th anniversary too, so we introduce you to 15 phenomenal facts about Utrecht to keep handy while visiting the place:

1. All beer lovers would love to be there as the city has a beer delivery boat concept which was introduced in 1996. Beer is an inherent part of their city, and they find that the best way to deliver beer, sodas, and drinks is by boats through the canals of Oudegracht in Utrecht.

2. The city has its own flag which has been there since 1952. It originates from two other flags, one part of the Archdiocese of Utrecht, and the other of the Archbishopric of Utrecht.

The flag of Utrecht consists of two horizontal stripes of equal width, the upper one white and the lower one red.

3. Did you know that Utrecht has its own chocolates? In 1922 the Domtorentjes chocolates were invented. These are made of chocolate with a soft filling and are made and sold by a bakery called Theo Blom. This bakery can be found at the Zadelstraat. It has big bonbons which are the best souvenirs you’ll ever find.

4. Utrecht is famous for its Dom tower, which is also the tallest in the Netherlands with 112 meters high and 465 stairs. Not only is it the most famous landmark in Utrecht, but the tower is situated right in the heart of the historic city centre.

5. With a length of around 5 kilometres, the Amsterdamsestraatweg is the oldest and largest street in the Netherlands. It’s all the way straight and around 200 years old.

6. Utrecht has the world’s most enormous bicycle parking garage – Stationsplein opened on 19 august 2019. And guess what? The parking lot currently has over 12,500 parking places.

7. Along the Oudegracht, there is a Dutch poem that starts around 279, on the corner of Smeebrug with letters carved into poem in the streets. Every Saturday afternoon, between 13:00 and 14:00, a new letter is added making it a never-ending growing poem.

8. The canals of Utrecht have won the hearts of voters around the world. And thus the city was voted as one of the most beautiful cities with canals in Europe. It is an honour for the city as it is in comparison to world-renowned Venice and Amsterdam.

9. Will it not be intriguing to move on the Utrecht streets? As there are around 1069 restaurants, pubs, bars, and cafes alongside the canals, there is always something you would like to eat or drink.

10. Utrecht is the youngest city in the Netherlands, almost 45 per cent of people that live in Utrecht are the youngsters. There’s no wonder that the city is growing at a faster rate, as it is a lovely city having all the historical and magical feel.

11. Utrecht is the first city in the Netherlands to install LGBT-friendly traffic lights. It has same-sex couple walk signs. The traffic lights aren’t the only thing that makes Utrecht awesome. The city also has a rainbow pedestrian crosswalk that is also fun. It’s a seemingly small but impactful change to create a more inclusive, accepting culture and society. 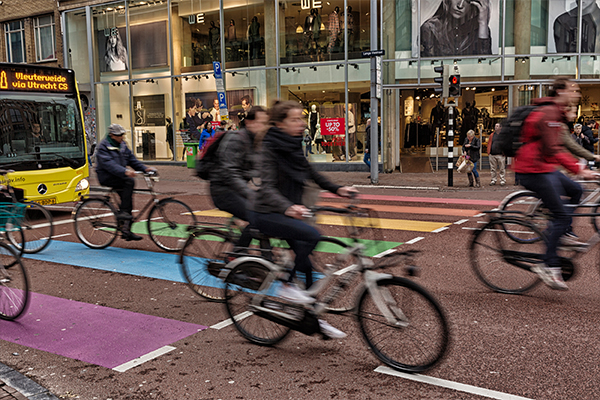 Sometimes, it really is about the little things that matter the most.

12. If you are someone who adores culture then there are 17 museums, with a variety of themes. The most famous museums in Utrecht are the Nijntje museum and the Spoorwegmuseum which embodies the things Utrecht is most famous for.

13. Nijntje, or Miffy in English, is the most famous bunny in the Netherlands. It was created by a man called Dick Bruna. You can find Nijntje in Utrecht at the Miffy museum.

14. If you are a soccer fan, you are in the perfect place. Utrecht has its own soccer club FC Utrecht. It also has its own television channel to watch its soccer games, interviews, and other fun things that are related to the soccer club.

15. The city also has Utrecht University, the biggest university in the Netherlands. Many universities and colleges are situated in the city. That’s why it’s home to many young students.

We all know how it ended for Adam & Emma in No Strings Attached, so if you tell me that there ever are no...

Veteran comedian Sunil Pal takes a dig at Krushna Abhishek after he confirms the rumors of quitting The Kapil Sharma Show. Just like Bollywood,...

Euphoria, a beloved TV series, is back with another exciting season of fun, laughter, drugs, sex and violence. See what this season holds for...

13 Bollywood Dialogues That We All Use In Everyday Life