The trailer for Rohit Shetty’s comedy Cirkus, featuring Ranveer Singh, Johnny Lever, Sanjay Mishra, Varun Sharma, Pooja Hegde, and Jacqueline Fernandez, has been unveiled. Cirkus is a trademark Rohit Shetty film that one may thoroughly and mindlessly actually watch in theaters alongside friends and family. In the clip, Ranveer plays twins who are oblivious of each other’s existence. Varun Sharma also plays two roles in this comedy thriller. One might assume Ranveer Singh to carry the entire show, yet the leading man is part of an entire cast where everyone has enough to munch on. In the trailer, the audience can see Ranveer’s character, “Electric Man,” who is a circus performer. He possesses some kind of ability that enables him to channel electricity and do circus acts. As he unleashes some quick one-liners, Johnny Lever seems to be in fine form. The trailer is additionally enhanced by Sanjay Mishra’s deadpan humor. Cirkus, like every other Rohit Shetty picture, provides the audience with an entire deal of humor, action, dance, and music. Deepika Padukone makes an unexpected appearance in a song alongside Ranveer Singh. The couple appears to have been having a great time with the high-energy dance and showed off their hook moves. 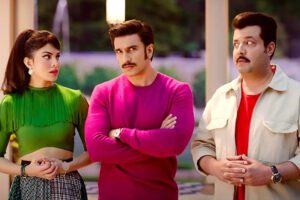 Jacqueline Fernandez will be the main female lead in this movie

While the comedy in Cirkus trailer works, what doesn’t work is the incredibly bright backdrop, the women having little screen time or powerful lines, and some dull sections in an otherwise hilarious clip. Tiku Talsania, Brijendra Kala, Mukesh Tiwari, Ashwini Kalsekar, and Vrajesh Hirjee, who frequently contribute color to a Rohit Shetty film, also make their presence felt by dropping quotable comments. Cirkus’ trailer is 3.47 minutes long, and filmmaker Rohit Shetty has done homage to all facets of the picture, including comedy, romance, and scale. Like the posters, the emphasis is not only on Ranveer Singh, Varun Sharma, Jacqueline Fernandez, and Pooja Hegde, but also on the supporting cast, which includes Johnny Lever, Siddharth Jadhav, Tiku Talsania, Sanjay Mishra, Vijay Patkar, Ashwinin Kalsekar, Mukesh Tiwari, Vrajesh Hirjee, Brijendra Kala, and others. Giving so many performers importance in a trailer is no easy undertaking, however Rohit Shetty and his team succeed admirably. Furthermore, the double role and big-screen appeal add to the impact. 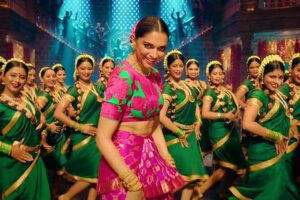 Cirkus is set in the 1960s, so expect to see a lot of costumed characters, bouncy and large hairdos, polka-dotted clothes, steam locomotives, antique cars, chiffon sarees, beautiful gardens, platform masters, English café house, and, of course, the ‘circus’ that has since been taken from public view. The video gives enough signals that, although being directed by Shetty, the film offers something new. And it appears that another movie world is in the works. Rohit Shetty shocks the audience at the conclusion of the trailer by displaying the ‘Jamnadas Orphanage.’ The Jamnadas Orphanage is the same institution where Gopal, played by Ajay Devgan in the Golmaal series, is reared as a child before meeting his four similarly mischievous pals – Madhav, Laxman, Lucky, and Laxman 2. The final sequence in the Cirkus teaser shows the five children standing outside the orphanage’s gate. This also indicates that Cirkus is the first film under Rohit Shetty’s new cinematic universe – Golmaal Series Plus Cirkus. If what appears to be true, Ranveer has become a part of two cinematic universes: Shetty’s Singham+Simmba+Sooryavanshi and the most recent one. 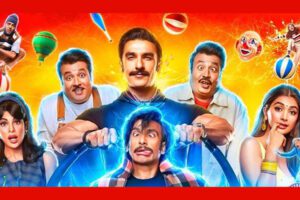 This movie might tell us more about Rohit Shetty’s Comic verse.

Ranveer Singh, a Bollywood actor, is returning with another big entertainer, this time alongside Rohit Shetty. The two collaborated on a lighthearted drama called ‘Cirkus.’ The trailer was released today, and it is full of brilliant colors. The film certainly promises endless amusement and a riot of hilarity. This movie will surely get a lot of success as Drishyam 2’s success brought the bollywood fans back to the theaters and this movie is also destined for the same kind of result. Fans are already buzzing about the trailer and can’t wait to watch the movies in cinemas near them as the movie is set to get released two days before Christmas that is 25th December.

Esha Kansara Reveal Her Relationship With Siddharth Amit Bhavsar: “Look what we did!”

Indian actress Esha Kansara made her debut in lots of TV shows. Though the actresses got engaged to a musician Siddharth Amit Bhavsar, which...

Australia is one of the most fascinating countries in the world and has many tourist attractions for foreigners to visitAustralia, the sixth-largest nation in...

Very rarely do we see two India-Pakistan games in a week since the two countries do not play any bilateral series together. The arch...

Sharing its border with India and China, Nepal is one of the most beautiful and diverse country you can find all over the world....