It seems as if everyone has had enough of the “Monday Blues.”

If you have ever thought that you are the only one who experiences those ‘Monday Blues’, trust me you are not. It would be appropriate to say that the whole world is with you. Guinness World Record has officially declared Monday as the ‘worst day of the week’ as many people, according to surveys, found the first day of the week to be extremely long and boring.

The official page of the Guinness World Record on Tuesday tweeted, ‘We’re officially giving Monday the record of the worst day of the week.’ Right after the tweet by GWR, there was a buzz on the internet where users shared their thoughts on the same. While some users shared their thoughts on the same, there were others who believe Monday should be renamed as ‘Ugh’ which is an expression of frustration. 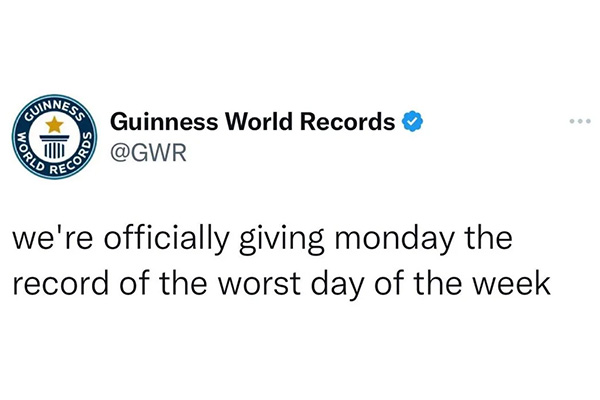 Users shared their thoughts on this tweet by GWR.

An official page for the well-known animated character ‘Angry Bird’, which was created as a video game based on a concept of stylized wingless birds, responded to the GWR tweet. When Angry Bird shouted, ‘Took you long enough, GWR replied, ‘Ikr,’ which is code for ‘I know right!’

In the comment section, users have frequently asked why it took so long to declare. Many users agreed with the announcement, while other users agreed that Monday was the worst day of the week. However, several responses were not in favor, arguing that it may deter some people from pursuing their passions and aspirations if they waited until Monday.

Spirit animals? Spirit FOOD is more like it! Here's which cuisine you are based on your zodiac sign. There are people who are absolutely indifferent...

How I met your mother actor Bob Saget, death was reported on Jan 9 in this 2022, which was unbelievable. Bob Saget did many...

: Christmas is just around the corner and people all around the world get excited to celebrate this day with their loved ones, but...