Cristiano Ronaldo has shared that he is 1000 percent sure about getting married to his long-term girlfriend Georgina Rodriguez, in the series of Netflix show based on Georginaâ€™s daily life.

The love affair of the Hollywood celebs has been talk-of-the-town very often but this time, the one who got all the attention of the headlines is none other than the super famous sports personality. Yes, we are talking about the Portuguese professional footballer, Cristiano Ronaldo. The footballer has yet again made to the headlines after surprising his girlfriend on her birthday, but this time it is something more than just a present.

Cristiano Ronaldo, who is now 36 years of age, has given a hint about his future plans with his long-term girlfriend, Georgina Rodriguez. The player has mentioned that the weddings bells might ring sooner than everybody is expecting. Ronaldo has confessed his love for his partner, Georgina saying that he is 1000 percent sure that they will get married anytime soon, as it is his mumâ€™s dream to see him get married and settle down with the love of his life. 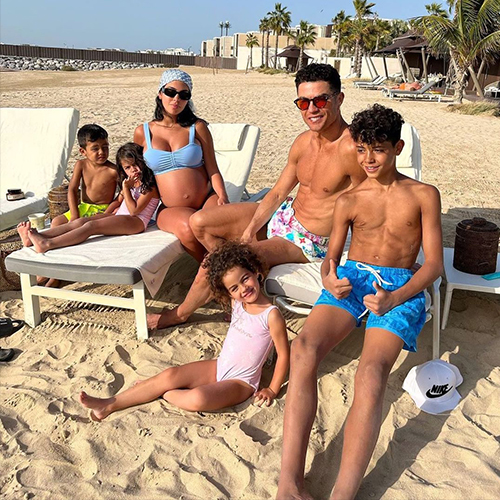 The couple announced Georginaâ€™s pregnancy through their social media handles.Â

Well, let us tell you how, where and when Ronaldo and Georgina gave this tiny hint about their marriage. Georgina Rodriguez is starring a Netflix series â€˜I am Georginaâ€™ along with her beau. The show is a series of documentary which is an in-depth portrait of her daily life as a mother, businesswoman, model and partner to Cristiano Ronaldo, as people were keen to get a sneak peak into the modelâ€™s daily life and her experiences. The show also features Georginaâ€™s family as they talk about her and her lifestyle. The couple has been dating for past 5 years and has been sharing their happy moments on their individual social media handles, which honestly is filled with love.

Recently, the couple announced Georginaâ€™s pregnancy with the football player and both of them are keeping their fans updated through their accounts on social media. The couple is expecting twins and are set to welcome them in the month of April this year. The professional footballer, Ronaldo is already a father to his 4 children, Cristiano Jr, whom he was a father to before he met Georgina, twins Eva and Mateo, who the player had via surrogacy and Alana, who he shares with Georgina. 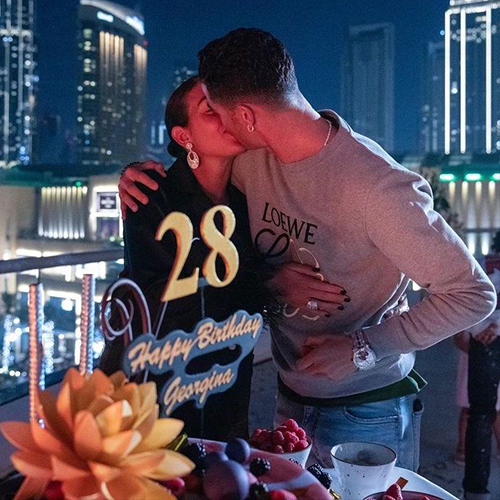 Georgina shared a series of pictures form her birthday celebration in Dubai with boyfriend Cristiano Ronaldo.Â

The couple met in 2016, during Ronaldoâ€™s Real Madrid days when he went for shopping in a Gucci store, where Georgina worked as a salesperson. The two have been inseparable since then. The footballer recently spent thousands to make her lady feel special, when he surprised her with a laser show on the tallest building of the world, Burj Khalifa in Dubai, where the family went to celebrate Georginaâ€™s birthday in a lavish way. The model shared a series of pictures form her birthday where she and her beau can also be seen sharing a passionate kiss under the gorgeous lights of Dubai. Not just that, the sportsperson even gifted a beautiful bunch of so many roses with a tag of love on it.

Well, till the time the couple officially announces their wedding details, we hope they keep their fans updated through their social media. Â Â

The best memories are made around the table.

To all those who want to experience the luxury of gourmet meals without spending much, we have the good news for you. Â From having...

Irina Myasnikova – Babe of the Month

A regular face in some of the most renowned magazines all across Europe, Irina Myasnikova is a sensual and fun loving babe. A happy...