Urbanity Peaks at The Moscow Fashion Week, Check Out Some Exciting Insights From The Festival 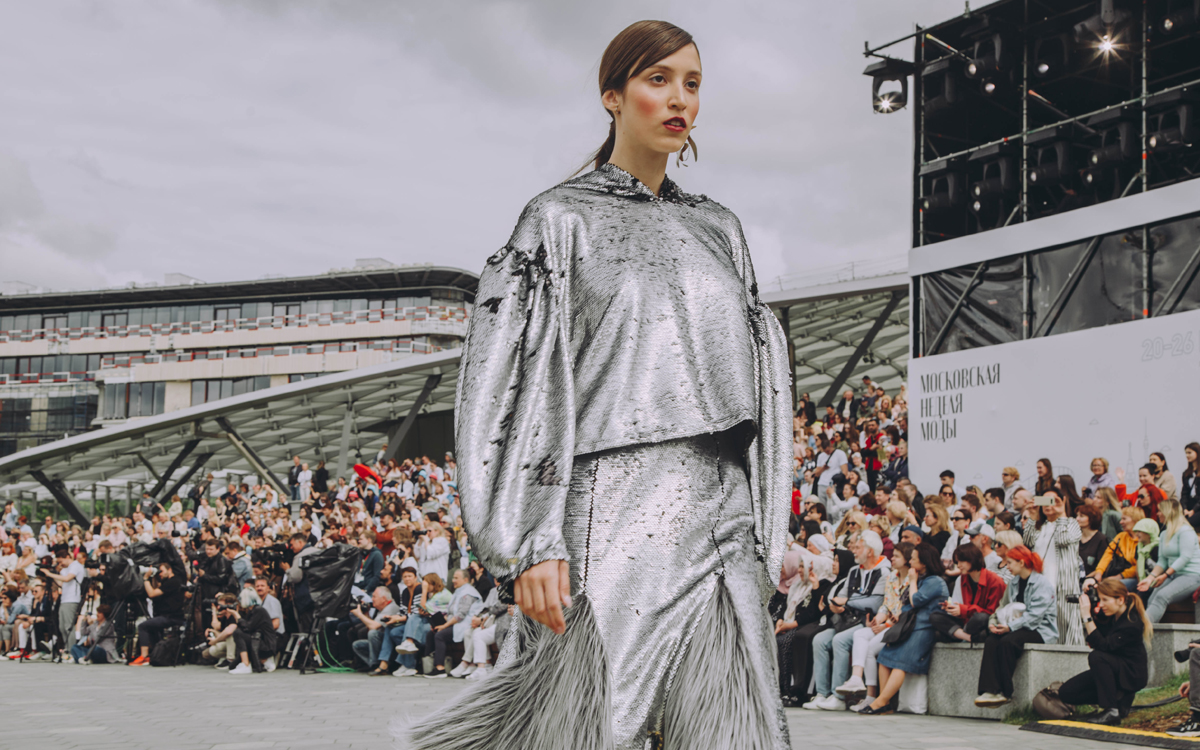 The World Is a Better Place with The Existence of Fashion Weeks! The First Ever Moscow Fashion Week Has Become the Talk of The Town, Keep Reading to Find Out Surprising Stories from The Event!

The morning of when fashion week begins is euphoric. With compelling energy, the first-ever Moscow Fashion Week took place in full swing from June 20th to 26th. The 7-day event witnessed vibrant collections from 450+ remarkable designers at several venues in Zaryadye Park, including the Exhibition of Achievements of National Economy (VDNH), State Department Store (GUM), and Revolution Square, and Mayakovskaya Metro Station.

There was so much more to it than just the runway and chic catwalks, Moscow Fashion Week had different marketplaces in which an array of brands participated, the audience could dive in and get their hands on anything they liked from clothes to shoes and even accessories. The showroom was yet another part that opened networking opportunities where designers presented their collections to top buyers.

All in all, it was an exhilarating experience where significant names in the fashion world covered the current aspects of the fashion industry with their expertise. Speaking of the brands, the looks brought by designers on the runway sure had immense potential. While some were out of the box and made it into our Wishlist, others will have to pick up speed in the fashion race. Amongst the 70 shows that were held, we have picked out the ones that spoke to us the most. Without further ado, let’s dive in and have a sneak peek of the most amazing collections by tasteful designers! 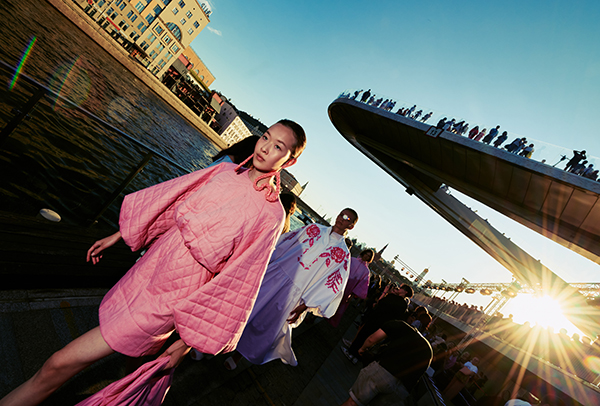 On 20th June, the energy was powerful. The first day of Fashion Week had commenced and one designer that made sure to get noticed was Julia Dalakian. Popular for her challenging use of color, this label uses quality fabrics and delivers laid-back, chich silhouettes. Speaking of their collection presented at the Moscow Fashion Week, it was the first time the brands presented both men’s and women’s apparel at once. The highlight was the velvet, leather, and sequin in dresses. On the other hand, menswear included suits, wide trousers, and velvet pilot jackets with designer appliqués. Bold colors with heavy makeup sure conveyed the out-of-the-ordinary message. To sum up, the collection was trendy and elementary elegant. 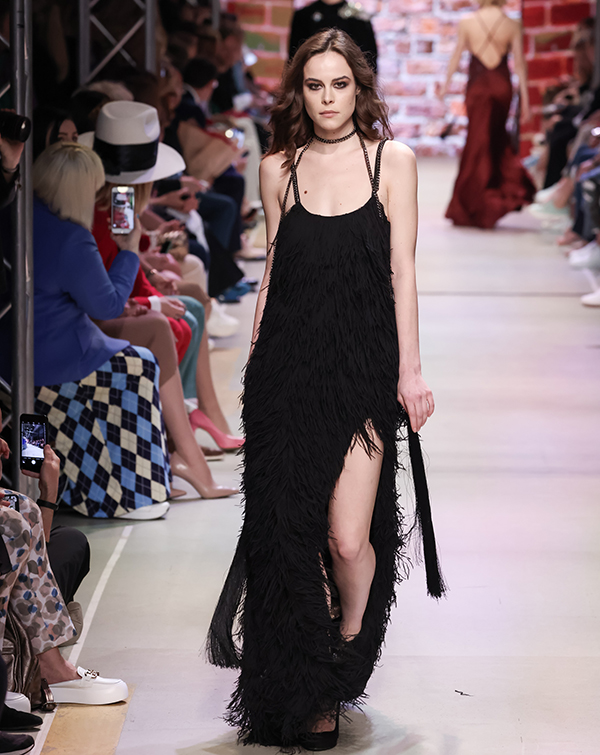 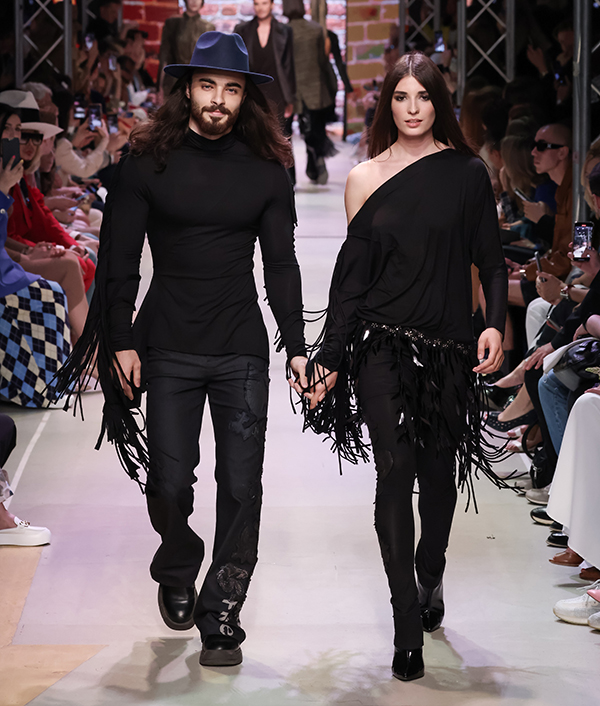 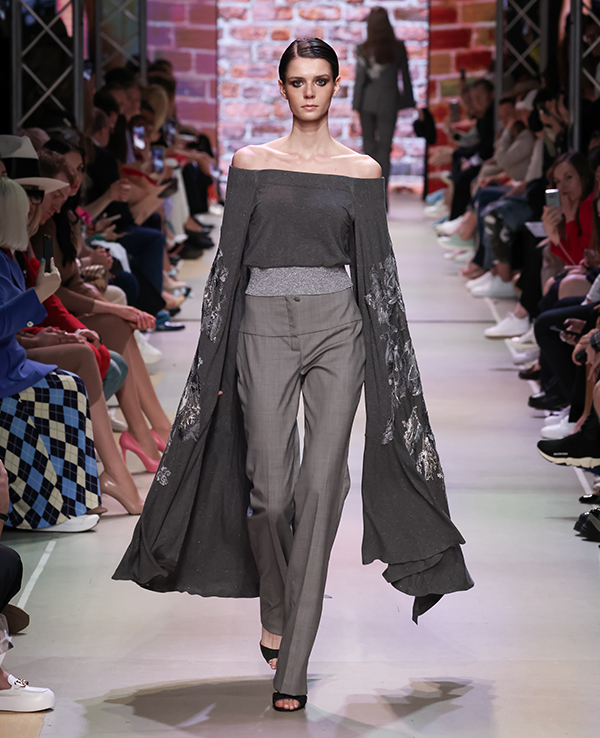 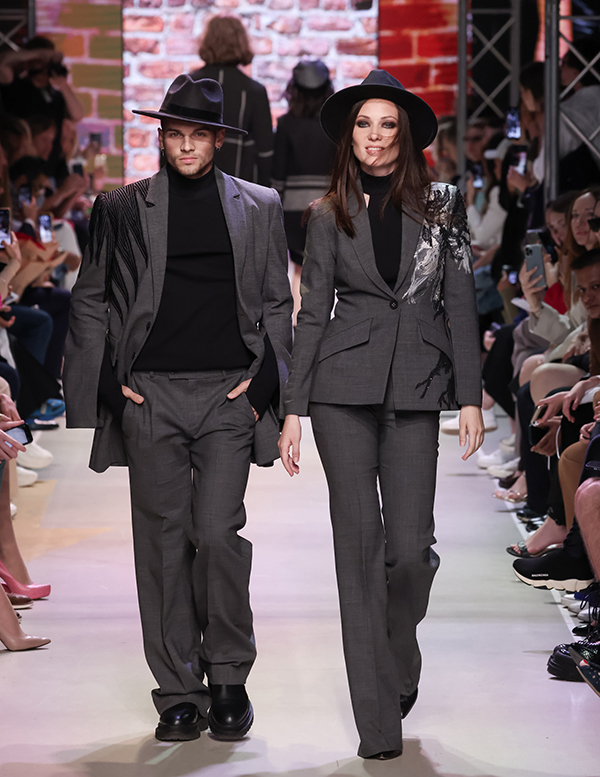 By the designer obsessed with experimenting, Kostya Skorokhodov; SHOCKING AFTERTASTE is one eccentric brand known for its quirky apparel in the industry. This brand on June 22th set the vibe of the runway like it’s 1970 again. He presented 50 handmade men’s and women’s pieces, with the street-style & classic punk-style factors common in all. There were cargo pants, low waist jeans, crop tops, oversize jackets and so much more in many color blends from blue, punk-pink, and even beige. Our favourite from the collection has to be the tie & dye denim jackets that seem to be referring to cowboys and grunge punk vibes! 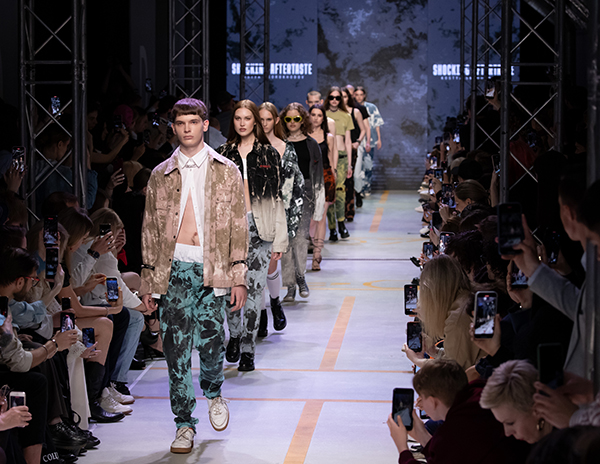 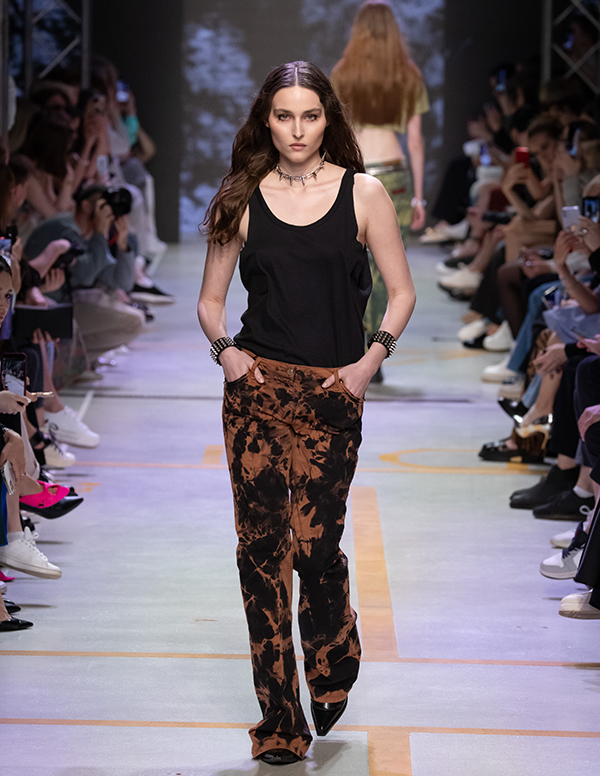 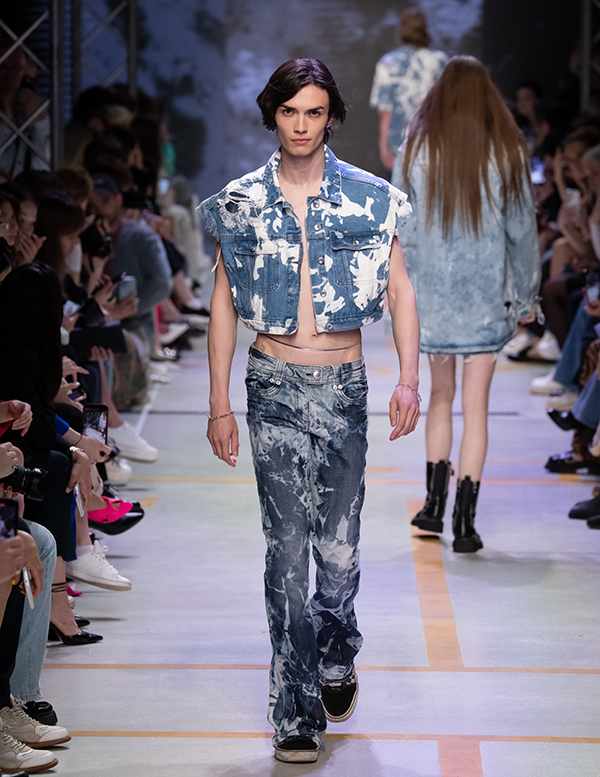 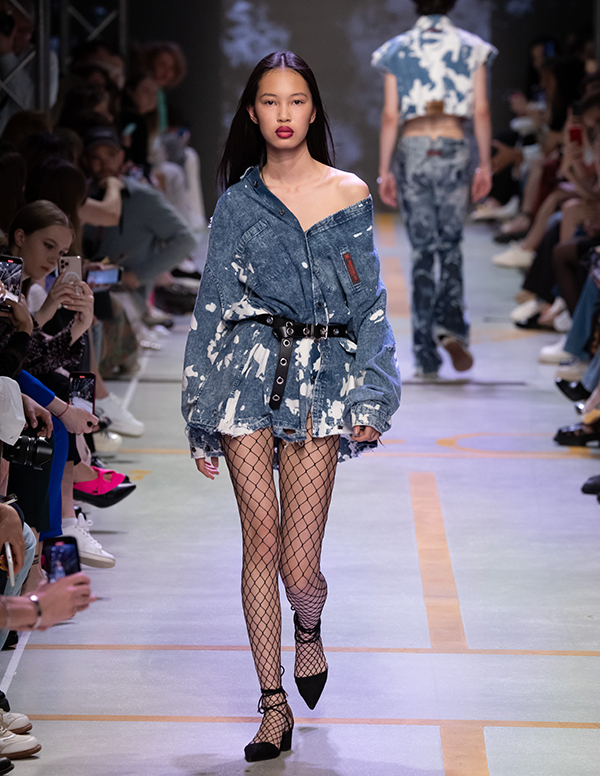 The brand describes itself with Femininity, individuality, and exquisite luxury, and after having witnessed its collection at the Moscow Fashion Week, it’s safe to say that the brand’s unique designs and bright details are timeless. Ester Abner painted the Floating Bridge in Zaryadye with love and it was dreamlike. Models walked in the most flattering hues ranging from green, neon yellow, pink, peach pink, red, silvery, and blue. The collection was a symbol of life and love, and mini dresses, shiny evening garments, asymmetric hems and decollates, classic jackets, and even some wedding looks were proof. Anyone seating there would have fallen in love with the brand’s silhouettes. 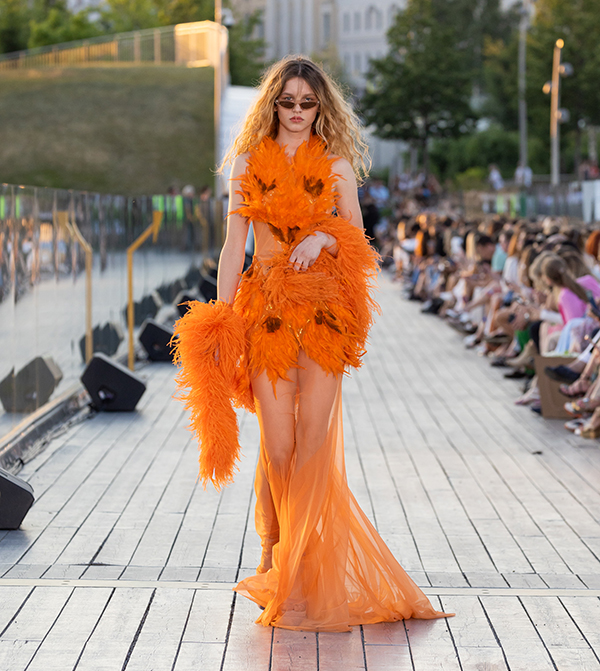 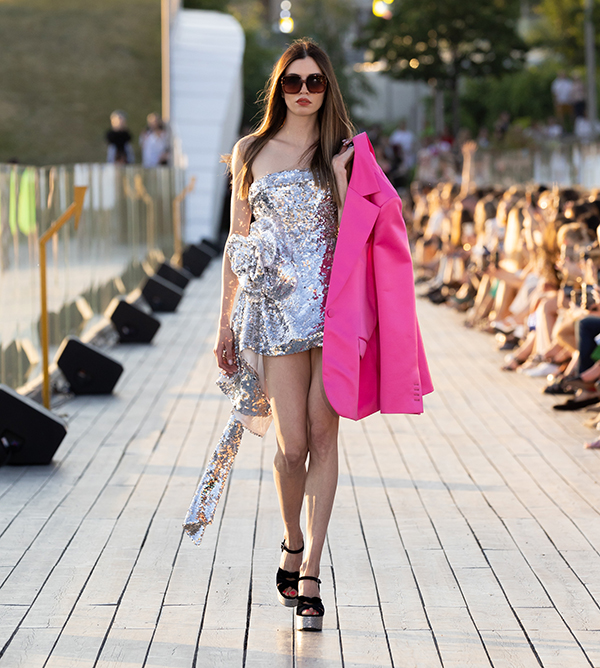 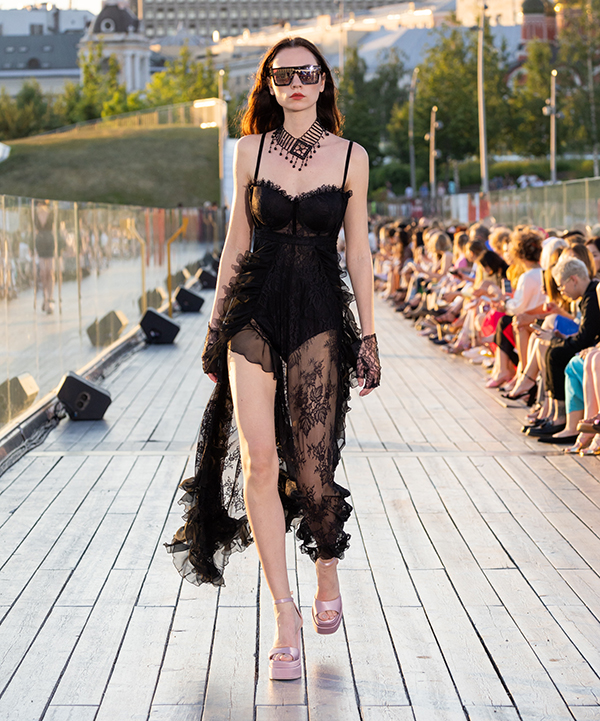 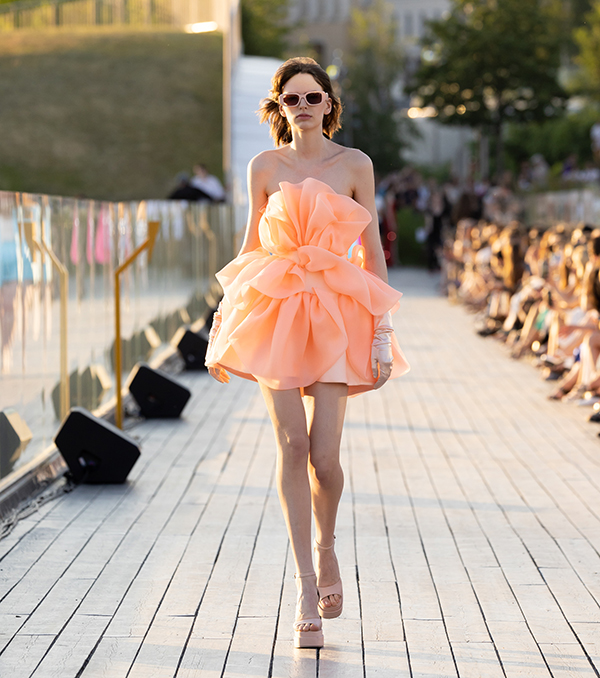