Hollywood Actor Jeremy Renner took to Instagram and shares a selfie of himself from the hospital after his snowplough accident as he gave his fans updates about his health condition.

Marvel star Jeremy Renner, who is famous for his role as Hawkeye in Avengers, on Wednesday took to Instagram and shared his health latest update. He shared a photo of himself in the ICU (Intensive Care Unit) for the 1st time since he suffered blunt chest trauma and orthopedic injuries in a snow-ploughing accident on New Year’s day in Reno, Nevada. In his selfie, he was seen showcasing a bruise on his face, wearing a hospital gown, lying on a hospital bed and said he was too messed up due to his health condition, sending love to all. And thanked his fans and well-wishers for praying for his speedy recovery. 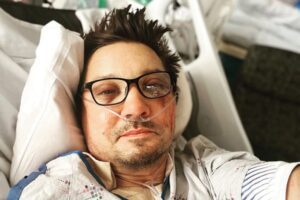 Many celebrities such as MCU actors and his friends Chris Hemsworth, Chris Evans, Chris Patt, Actress Michelle Lynn Monaghan, the Filmmaker duo Russo brothers and his movie Mission Impossible- Ghost Protocol co-star Anil Kapoor commented on his post, that they wished him a steady & safe recovery. And his fans also reacted to that post sending him love and praying for his speedy recovery.

According to the reports, the actor was hospitalized after the snow-ploughing incident on Sunday. He was run over by a snow plough weighing more than 14,000 pounds which he has used to tow his car on a snowed-in private road near his home. 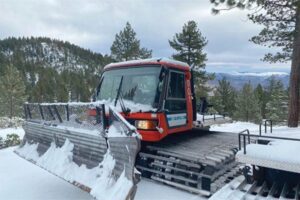 Hollywood star Jeremy Renner was moving the snow from his driveway to help his family member who was departing his home after spending New Year’s eve together by driving the car and his car got stuck in the snow. Because of the large snowfall of around three feet of snow, there had been no power supply for 24 hours. So, he was trying to help everyone to clear out the snow to make it easier for people to head out. After successfully towing the car, the actor got off the plough, which then began to roll. He attempted to get back into the plougher’s driver seat to stop the rolling vehicle but was run over.

After the incident, the actor was airlifted out of Nevada town on New Year’s morning. One of his neighbours, who is a doctor managed to place a tourniquet on his leg until paramedics arrived to airlift him to the hospital.

Jeremy Renner suffered from blunt chest trauma & orthopedic injuries after the accident and underwent surgery on 2 January, following which he remained in the ICU in critical but stable health condition at the time. His family thanked the doctors & hospital staff for taking good care of him and the actor’s fans & well-wishers for praying for his recovery and giving him so much love and support.

On the work front, the actor most recently starred in the series Hawkeye, which is streaming on Disney plus Hotstar. He is famous for his role as Hawkeye in MCU movies (Marvel Cinematic Universe), beginning with Thor movie (2011), and The Avengers movie ( 2012). Jeremy Renner was also featured in movies like The Hurt Locker and The Town.

There isn’t a great long history of fast bowling players becoming all-rounders at least in test cricket. But those who have represented their teams...

You Cannot Walk in These Pumps

Walking in comfort means getting your hands on comfortable footwear. If you want to avoid discomfort in your life, these are the pumps you...