Indian Film RRR wins two awards at the Critics Choice Awards 2023. Here’s the list of movies that bagged the trophies. 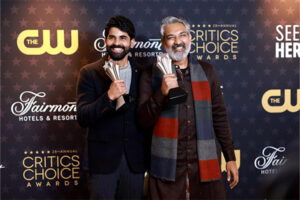 RRR film had earlier scored a victory at the Golden Globes Award 2023 as the song “Naatu Naatu” won for Best Original Song award despite competition with the “Lift me up” song sung by Rihanna. This song is composed by MM Keeravani and sung by Rahul Sipligung and Kaal Bhairava featuring actor Jr. NTR and Ram Charan. The song was dubbed in four languages such as in Tamil ‘Naatu Kotthu’, in Malayalam as ‘Karinthol’, in Kannada as ‘Haali Naatu’, and in Hindi as ‘Naacho Naacho’.

This blockbuster film is also nominated for Oscars 2023 and will be held in March for the same song “Naatu Naatu” in the Best Original Song category.

On the other hand, James Cameron’s Avatar: The way of water wins the Best VFX award at Critics Choice Awards. Avatar 2 is a sequel to the 2009 movie Avatar. RRR was contending against movies like Black Panther: Wakanda forever, The Batman, Avatar: the way of water, Top Gun Maverick, and Everything Everywhere All at Once. 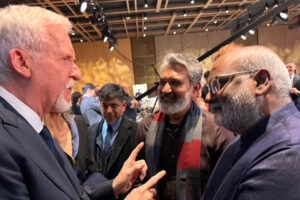 Filmmaker James Cameron also revealed that he watched RRR and he liked it so much that he recommended this movie to his wife and watched it with her again. Filmmaker Rajamouli took to Twitter and share a few pictures with James Cameron and wrote that he can’t believe that the Avatar movie director James Cameron spent 10 minutes analyzing his film.

RRR and Everything everywhere all at once both movies contending against the Avatar: the way of water, The Banshees of Inisherin, Babylon, Elvis, Glass Onion: A Knives Out mystery, The Fablemans, The TAir, Women Talking, and Top Gun: Maverick. This director duo movie all won 2 awards at the 80th Golden globes awards and Filmmaker Rian Johnson’s Glass Onion: A knives out mystery won the Best Comedy award.

Destination Is Decided, But Still Looking for Opulent Resorts to Stay & Have the Best Time on Your Vacation. Dive In We Have Two...

6 Hottest thinga a guy can do for his woman! Polina is here to help you guys know the things you can do for your...

Comedian Kapil Sharma is ready to make his singing debut in a collaboration with Punjabi singer Guru Randhawa and shared the poster of their...