The fifth episode of the current season of Koffee With Karan is out and except for Aamir’s witty replies, it was just a sleeping pill.

The latest episode of Koffee With Karan is out and honestly this time, we have a lot to talk about the guests because they didn’t talk much. The fifth episode of the hot gossip show starred Mr. Perfectionist of Bollywood Aamir Khan and the Iconic Poo, Kareena Kapoor Khan. While Aamir made some witty and sassy statements on the show this time, on the other hand, we observed the calm and zen nature of Bebo which honestly, did not suit her, especially for a talk show.

If you haven’t watched the episode yet, can you guess the first thing that the host of the show Karan Johar and the stars for the night Aamir Khan and Bebo discussed? Well, it was Aamir’s fashion sense. Mr. Perfectionist chose his comfort over anything else and was seen in a basic Khadi Kurta with pants, which still made him look so elegant. With their upcoming movie just around the corner for release, both the Bollywood stars spilled the beans about the movie’s making and some details came as a surprise. 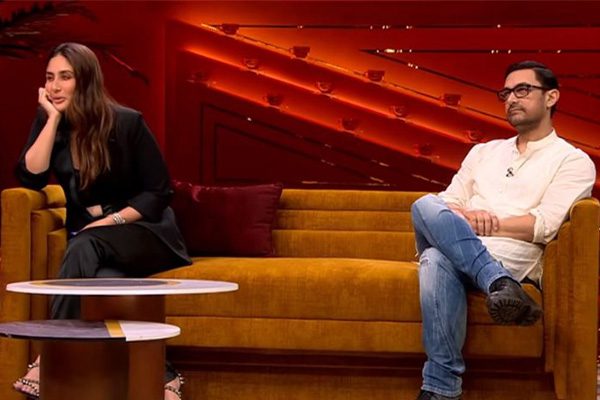 The guests for the latest episode of Koffee with Karan were Aamir Khan and Kareena Kapoor Khan.

The lead actor of Laal Singh Chaddha, Aamir Khan revealed that Kareena Kapoor Khan was not the first choice for the film and she had to give a screen test for the upcoming movie. Aamir further explained how the makers realized that the actress suits perfectly for the role of Rupa and made the decision of casting Bebo in the movie and how it took a considerably long time to get the rights of ‘Forest Gump’, the original inspiration for Laal Singh Chaddha. Moving further the trio also discussed the changes that have taken place in the Hindi entertainment industry and how the box office pressure is playing with Aamir as his upcoming movie will clash with Akshay Kumar’s ‘Raksha Bandhan’ on August 11. 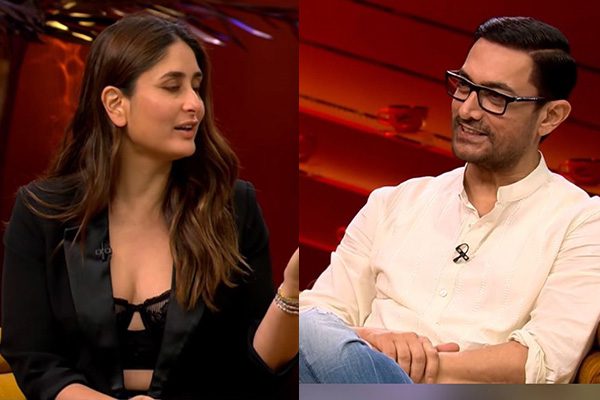 Both the actors will be seen together in their upcoming movie Laal Singh Chaddha.

Over the years, we have seen KKK making witty statements and throwing sass all over the Koffee couch, this time the case was different. Kareena stated how calmness has entered her life which was quite visible on the show as she didn’t even perform well in the popular ‘rapid fire round’, which is the highlight of the show. on the other hand, Aamir, who is known for his calmness and sophistication, was in the mood for a lot of sass as he didn’t miss any opportunity to pull Karan’s leg. Aamir Khan jokingly took a dig at KJo when he said Kareena Kapoor Khan’s character “Poo,” who has since gained cult status, was the only aspect of Karan Johar’s K3G that Aamir found amusing.

While talking about the cop universe he has created, he mentioned that as promised, a female cop will soon be seen ruling the screen, but no names have been disclosed till now for the female lead for Singham 3. However, until now, along with Ajay Devgn, Ranveer Singh and Akshay Kumar, the Shershah star Sidharth Malhotra will soon be seen in the Shetty cop universe.

While Aamir was all witty with his answers, Kareena lacked the fun element of the show.

Talking about their equation with their family, Aamir shared how he has the highest regard for both her ex-wives Reena Dutta and Kiran Rao and all of them will always be a family no matter what. On the other hand, Bebo shared how he has developed a friendly relationship with Saif’s kids Sara and Ibrahim and she will always be there for them. However, everyone expected Kareena to be sassier but this time, the episode was just not a hot cop of coffee.

Fit And Handsome As Ever, Anil Kapoor

Looks like Mr. India, Anil Kapoor is ageing backwards and these images show that 'He really is on top of the world'

A bag perfect for your vacations and beach trips. But exactly how practical is it? Read on to find out!Carrying bags on arms seems...

Palak Tiwari Reveals About Shweta Tiwari’s Ex-Husband, You Will Not Believe This!

The Bijlee Bijlee sensation actress Palak Tiwari made her debut in the industry; she is the daughter of Tv actress Shweta Tiwari. She even...