‘I will see you again’, writes Shehnaaz Gill as she remembers the love of her life, Sidharth Shukla, on his birthday.

We have seen Shehnaaz Gill remembering the love of her life and late actor Sidharth Shukla every now and then. But last night, Shehnaaz remembered Shukla for a very special occasion as it is Sidharth Shukla’s birth anniversary. Shehnaaz shared a heartfelt message and some unseen pictures of them together. Taking to her Instagram stories, Gill shared the pictures of two cakes that she cut on Sidharth’s birthday. 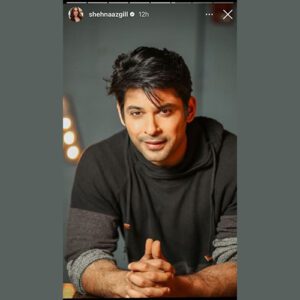 Sidharth Shukla would have turned 42 years this year.

Bigg Boss 13 not only gave fame to its participants but there were also some who found pure love inside the house. Sidharth Shukla and Shehnaaz Kaur Gill are the two names who met on this show and fell in love with each other. While people were celebrating the love these two shared, destiny had its own plans. Everyone’s favorite and Shehnaaz’s love, Sidharth Shukla passed away last year due to a cardiac arrest. The Balika Vadhu fame actor would have turned 42 this year. 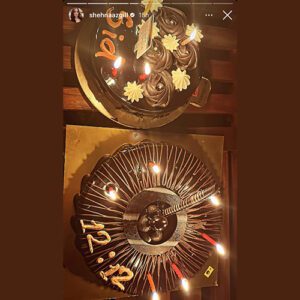 Shehnaaz shared some lovely pictures with Sidharth on his birth anniversary with a heartfelt note as ‘I will see you again’ along with a heart and angel emoticon and cut the two cakes. Sidharth and Shehnaaz came close during their time in Bigg Boss 13 and every bigg boss fan loved the chemistry that these two shared. Also, these two were reportedly in a relationship and were planning to tie the knot. After Sidharth’s sudden demise, Shehnaaz was entirely heartbroken, but she came back to life as a much stronger person. We have often seen the multi-talented lady remembering Shukla on various occasions.

In her Instagram post and stories on Sidharth’s birthday, Sana shared a lovely picture of Shukla from the introductory episode of Bigg Boss 13, where we can see Sid in a white shirt and leather jacket, with his hands flaring up in his hair. In her stories, she shared a monochrome-tone picture where we can see Shehnaaz holding Shukla in her arms and the other picture was a beautiful closeup of them holding each other’s hand. 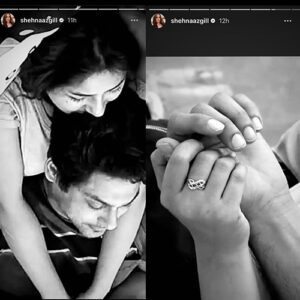 Many industry friends and fans reacted to the pictures posted by Gill. While some fans showered love on #Sidnaaz, others shared their

From being ‘Punjab ki Katrina Kaif’ to ‘India ki Shehnaaz Gill’, Bigg Boss 13 fame Shehnaaz aka Sana has come a very long way in her career. Recently, Shehnaaz won an award at Filmfare Middle East Achiever’s night, and while concluding her gratitude speech, she dedicated the award to Sidharth Shukla. 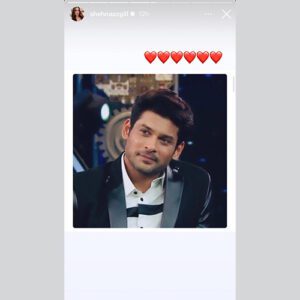 On the work front, these days Shehnaaz is having a lot of conversations with Bollywood megastars like Ayushmann Khurrana ad Vicky Kaushal on her special chat show ‘Desi Vibes with Shehnaaz Gill’. She was also seen in MC Square’s music hit. Shehnaaz, who is known for her on-point Punjabi has tried her hands with a Haryanvi song this time, however, the song has been getting mixed reactions from the audience.

Gill is also set to make her Bollywood debut on the big screen in Salman Khan’s upcoming movie ‘Kisi ka bhai, kisi ki jaan’, which is expected to hit the big screens next year in April.

'Tis the season of all things spooky! This sentiment extends to your Halloween party as well! Read ahead for some spooktacular games that will...

There is nothing more romantic than Italian food, and well for the month of tenderness we had to get something that is simple yet...