Dhanush and Aishwarya got married on 18 Nov, 2004 and it has been 18 year of their relationship. After Samantha ruth’s divorced Nag Chaitanya, this separation sound more shocking than ever. The separation announcement was announced on Monday night, after a while the wife, Aishwarya’s R Dhanush also announced the separation. But does this separation happen Overnight? Read below to find out.

South actor Dhanush usually posts a letter, but he announced this post on Monday night, surprised all of us. On his Instagram page, he posted this 18 years of togetherness as friends, couple as a parent, and well-wishers to each other. The journey has been of growth, understanding, adjusting, and adapting.

Added today we stand at a place where our paths separate. Dhanush and Aishwarya have decided to part ways as a couple and take time to understand us as individuals for the better. Ended with Please respect our decision and give us needed privacy to deal with this. Much love always to you all, godspeed. Rajinikanth’s daughter Aishwarya wrote on her caption by saying No caption needed, only your understanding and your love necessary! The same letter both the couple shared on Monday. But after a while, Dhanush deletes the post on Instagram. 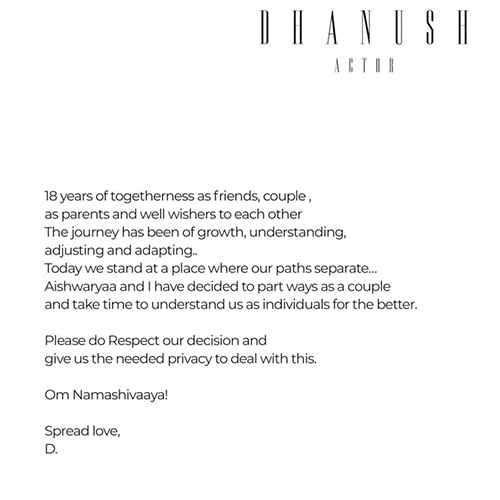 Dhanush and Aishwarya have decided to part ways as a couple.

After Dhanush posted about the separation, the fans got overwhelmed and shared their thoughts with these tweets. Said We Stand With You Dhanush. Some of the fans posted previous pictures of admiring the couple and wrote “This is really heartbreaking news. Hope God will give strength and guidance to both of you, in this tough time”. The fans do receive the news with shock but are being supportive of the couple.

The reason for this separation is still hidden, as the couple was recently seen in a viral video where the actor was singing a song for his wife. Fans are wondering what went wrong but still giving the support that the couple has asked for. 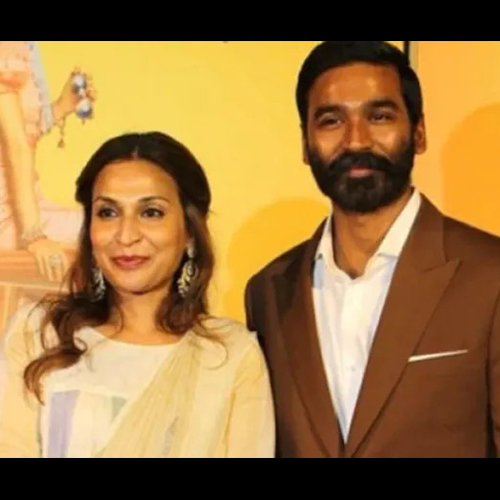 The couple was recently seen in a viral video where the actor Dhanush was singing a song for his wife.

The rumors are spreading, one of the close friends of the couple reveals Dhanush is someone who loves to work, his movies and acting career has been a lift, in the Tollywood industry. His back-to-back movie offers, lead him to travel more and spend his time on sets, which is a reason for this separation as he is a workaholic. Though this inside news is a rumor or a fact, it is not revealed yet.

As Dhanush is known as a hardworking south actor, he has also been quite private about his close friendship and relationship, which should be respected. For now, the couple has not revealed any reason behind their separation.

A great spectacle of football from a neutral fan’s point of view which ended in a fairytale ending for one of the greatest footballing...

Personal Space – The Secret to a Long-Lasting Relationship

It takes time to establish healthy relationships. But to establish one requires that you learn to apply the concept of personal space. Read on...