In India’s opening match of the Asia Cup 2022 against Pakistan, Hardik Pandya delivered an outstanding all-around effort to help India pull off a thrilling victory in the last over

The greatest rivalry in world cricket was back in Dubai as India took on Pakistan in the second game of the 2022 Asia Cup. The tensions in both the camps must have been high as the whole world would have tuned in to watch two great teams play out an exciting game of cricket. There were a few selection headaches for India, going into the match. The first was the wicketkeeper choice, which Dinesh Karthik won and he was selected ahead of reliable Rishabh Pant. The second was the bowling combination that the team wanted to go with, India went with another pacer, as Avesh Khan tiptoed into the team over veteran Ravichandran Ashwin. Pakistan’s playing eleven was far more similar to before but had a young star in their team as Naseem Shah made his T20I debut. 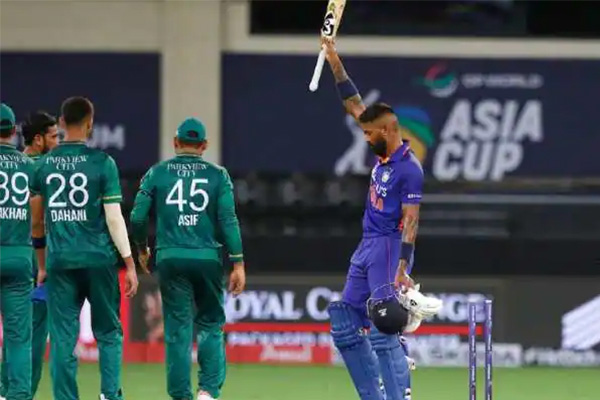 The Indian team won the important toss and decided to field first as they fancied chasing a target set by the opposition. With the ball, India got off to a great start thanks to Bhuvneshwar Kumar’s early consistency. The early movement gave India optimism, even though Mohammad Rizwan reversed a ruling against him and survived an India caught-behind review. However, Bhuvneshwar used the unexpected short ball tactic to send Babar Azam back for 10 and give India the early wicket. After sensing a nick to a short one from Avesh Khan, Fakhar Zaman soon left, giving India the upper hand in the Powerplay. 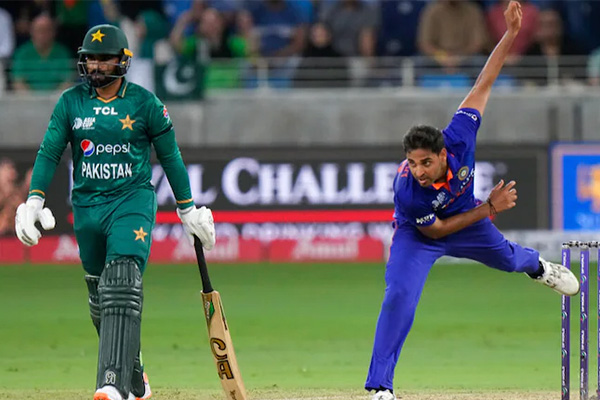 The middle over phase was tricky for both teams as Pakistan were trying to find runs and stitch a big partnership while India was looking for wickets at regular intervals. Rizwan was playing a gritty knock at one end and Iftikhar Ahmed was hitting big shots from time to time. It needed a brilliance from Hardik Pandya, as he banged in a short ball to dismiss Iftikhar Ahmed. It was a much needed wicket as the partnership was nearing fifty and would have been costly for India if the batsman stayed longer at the crease. In the previous over, Iftikhar gave a chance to Chahal which he couldn’t exploit and missed a caught and bowled chance. After the wicket of Iftikhar, the wickets began to tumble quickly with the fast bowlers doing a tremendous job. Pakistan still only had 114 after 17 overs, and Mohammad Nawaz was dismissed off the first ball of the following over. However, Haris Rauf and Shahnawaz Dahani gave them a battling total with some ferocious hits toward the finish. Pakistan scored a respectable total on a difficult ground in Dubai with 33 runs coming off the final three overs. Even with 147 on the board, it would be hard to stop India’s all-star batting lineup. 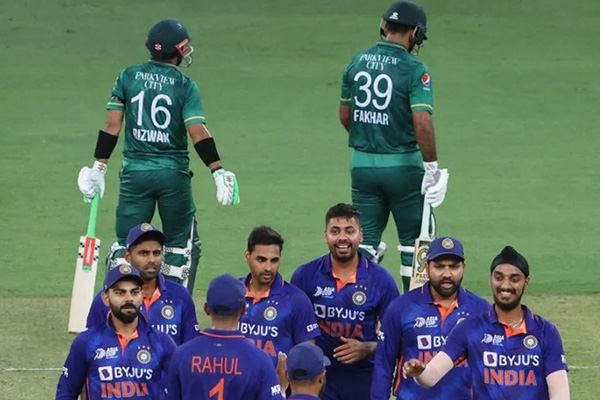 Vice Captain KL Rahul and Skipper Rohit Sharma, stepped on to the crease to chase this total and avenge last year’s mammot defeat. India’s pursuit of a target of 148 did not get off to a good start. KL Rahul was dismissed for a golden duck by debutant Naseem Shah during his bowling effort. Rohit Sharma struggled to get going, but he and Virat Kohli did their best to steady the ship with a 49-run partnership off 46 balls. In the end, Rohit was defeated by Mohammad Nawaz for a slow 12 off 18. The match’s star player, Virat Kohli, did display a few signs of his previous form. He was in terrific position and played the shots late. The surface prevented him from going bang bang, but he still managed to play a significant 35-run knock off 34 balls. He got out in a similar fashion, just like Rohit and both of them would be thinking about their dismissal if India hadn’t won. 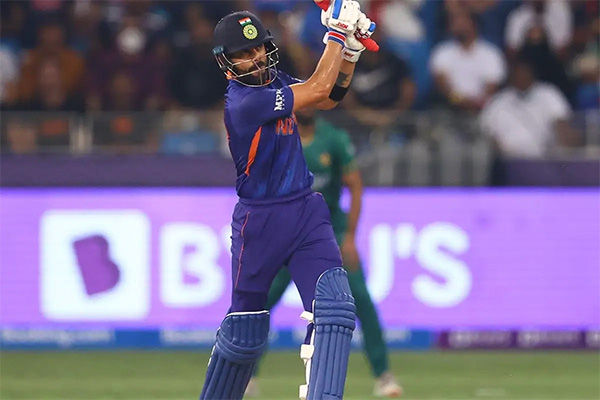 We saw a surprise in the batting, as left handed all-rounder Ravindra Jadeja was sent ahead of India’s white ball specialist Suryakumar Yadav. It was an attempt to have a lefthand-righthand combination in the middle, as Jadeja was the only left handed batsman in the Indian batting line-up. Pakistan continued to suffocate India with tight lines, and despite the promotion of left-handed Ravindra Jadeja and the partnership of ICC No. 2 rated T20I batter Suryakumar Yadav, India was unable to fully escape the restraints for a while. In an attempt to reduce the required run rate, Suryakumar tried to loft a ball for a boundary, but missed it and got bowled in the process. 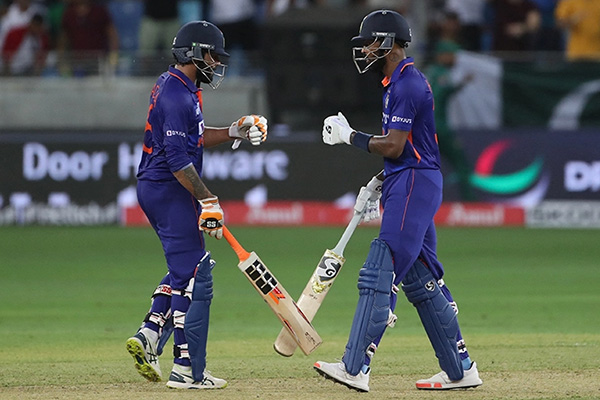 India had just lost Suryakumar to an excellent delivery from the outstanding Naseem when Pandya entered the game. Pandya brilliantly changed the momentum when 59 required off 34 balls. Later in the over, he hit Naseem for a four, but after that, he played through two solid overs to go to 14 off 10 balls. With a four and a six off Naseem’s 18th over, Jadeja helped India come back. It was a great effort from Naseem Shah, the debutant who managed to survive cramps and bowl out his quota of four overs. The situation was then turned around in favor of India by Pandya with three fours in the penultimate over, leaving India needing only seven runs from the last over to win. Nawaz fought back and sent back Jadeja off the first ball of the last over to keep the game close, but Pandya’s six off the fourth ball of the over gave India the victory. 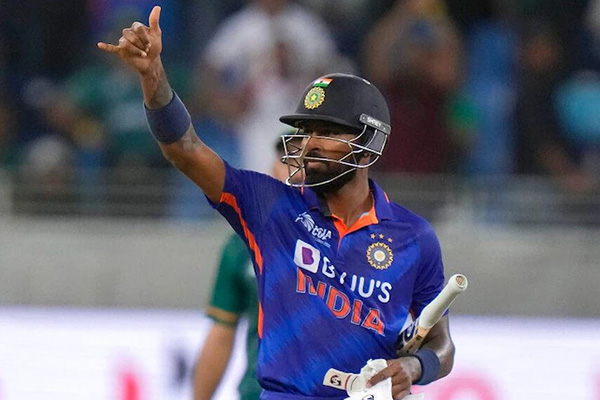 Pandya said that he knew that the bowler is under pressure in the 20th over while bowling to him, because of his confidence

Many high profile people were in attendance at the Dubai International stadium to see India win. Vijay Deverakonda, Urvashi Rautela, Krunal Pandya, Shaheen Shah Afridi, and Jay Shah are just a few examples of public figures. If both teams advance out of their groups, India and Pakistan may play each other again on September 4th, so there may be plenty more the next week. I 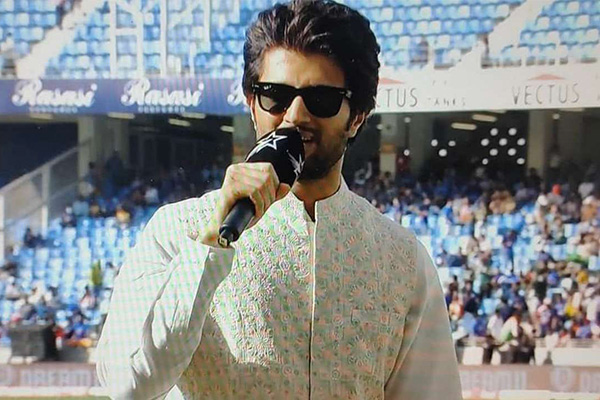 India easily defeated their bitter rivals in a game under extreme circumstances. Billion people watching Hardik Pandya around the world were able to rest easy knowing that India defeated Pakistan. Pandya was named man of the match, and rightfully so, as he completed the game by scoring substantial runs and taking three wickets for his team. India faces Hong Kong on Wednesday, looking for a complete performance despite having already secured a spot in the super 4. Pakistan’s only need to make the super 4s is a victory over Hong Kong on Friday. Fans would be hopeful that both India and Pakistan will make it so they could see the teams play again.

Aamir Khan is set to hit the big screen after 4 years with his upcoming movie ‘Laal Singh Chaddha’ amid the hashtag to boycott...