Ride on Gold Wheels With This Outrageously Expensive Bicycle

While it might not seem fiscally sound to purchase a bike costing almost triple what a car would, sometimes you just have some extra cash to burn. And if that happens, anyone would give in and purchase what their heart truly desires – in this case, an obscenely expensive bicycle. Giving a whole new meaning to the phrase ‘Midas touch,’ we have this customized racing bike. Publicly acknowledged as the most expensive bicycle ever sold, this men’s racing bike from Goldgenie redefines luxury. 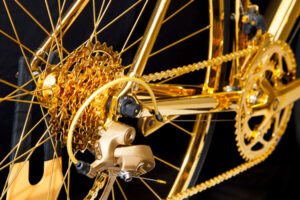 The entire structure of the bike is covered with a lustrous layer of the 24k gold – even the ridges of the gear chain.

Goldgenie’s in-house team of customization artisans meticulously embellished a men’s British racing with 24K gold. That’s what makes this bike cost so much. The entire structure of the bike is covered with a lustrous layer of the 24k gold – even the ridges of the gear chain. It also got sophisticated accents in black in a limited-edition soft San Marco suede saddle and SR4 racing tires. The rest of the hardware is pretty standard. Now, this might not reach the speed of light, but it will surely catch enough light as you ride it.

From the moment mankind discovered precious metals, gold has occupied a popular position in everyone’s mind. But so have diamonds. And if all the bling on this bike falls short, buyers have the option of getting the bike frame encrusted with diamonds. This bicycle makes for a one-of-a-kind, and a once-in-a-lifetime gift for someone truly special, or even just an extra-special treat for yourself. 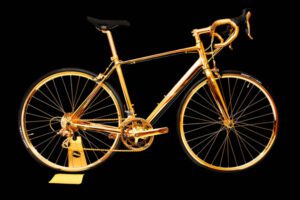 Extremely striking to look at, the bike is even more beautiful when it is in motion. The spinning wheels catch the sunlight and ripples along with the golden frame – a bespoke experience one must have in their life once. Goldgenie is also working on making several more additions to this range which will also include diamonds. Definitely something to put on the bucket list!

Crispy Corn Who doesn’t like corns? Well, it’s a friendly snack, and we love it and believe so do you guys. Crispy corn is an...

The winter chill is the only signal we need to break out the winter classics. Let’s take a look at these delightful winter cocktails...