Eight teams still remain at the World Cup, who are battling it out for supremacy and win the coveted title.

We have reached the quarter final stage of the 2022 FIFA World Cup and the chase to the top only gets tougher from here on in. Europe has the highest representation with five teams making it to the quarter finals. Brazil and Argentina are keen on bringing back the trophy to South America whilst we have only one African team left which is Morocco. So let’s dwell into how the quarter finals matches are shaping up and which of the teams that are left would be favorites for the World Cup title. 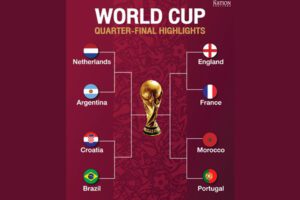 Netherlands are looking like the 2010 team that reached the final and lost on the final hurdle to Spain in extra time. That Netherlands squad was full of legends and it is similar to the current side with big name players playing with youngsters grinning for glory. The Netherlands has been among the most disciplined teams in the World Cup thus far under Louis Van Gaal. With three wins and one tie, they have remained unbeaten in Qatar. The Dutch wall of defense has been impenetrable, with Virgil Van Dijk at the helm. Frenkie de Jong has emerged as a standout in the middle. While the explosive pair of Cody Gakpo and Memphis Depay lead the attack. Louis Van Gaal in an interview has claimed that he knows the weakness of Messi and would be willing to use it to his team’s strengths.

Argentina is a team not to be underestimated and had entered the World Cup with a 37 game unbeaten run, only to be beaten by Saudi Arabia in their first game of this year’s tournament. Lionel Messi is the heart and soul of the team and even the players are ready to die for him. The only problem Argentina has is of not finishing games off clinically which the other major teams like France, Brazil and Portugal have done. On good days, they might survive the pressure, but against quality opposition, they might struggle to hold onto the leads.

Both the teams are good on paper and have a chance of going to the semi-finals, but Messi has to do something spectacular again if he wants to keep the hope of winning the World Cup alive. The Netherlands might just have the upper edge because of their incredible team balance and form. Let’s see what’s in store for the fans when these two teams face off on Friday. 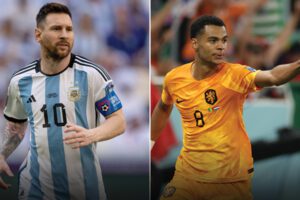 Messi Magic or Cody Class in this epic match?

Brazil had a 4-1 victory over South Korea on December 5. Brazil won the competition with seven more shots on goal, 17 to 10. Vinicius Junior was among four Brazilians to score against South Korea. The kind of football Brazil has played till now is pure class, it has everything starting from technique to precision to accuracy and finesse. They top it all off with their incredible dance moves after every goal. They have a selection headache in almost every position but the Brazilian coach has been relatively quiet about his starting XI for any game.

Croatia defeated Japan on penalty kicks in its previous game on 5th December. Croatia outshot Japan by a margin of 16 to 12. On two shots, Ivan Perisic scored Croatia’s lone goal. Each and every game, Luka Modric proves to football fans all over the world that age is just the number. He still has the class and the temperament to find the key passes and knows when to shoot the ball and when to drop back and help the defense out. Gvardiol, the centre back from RB Leipzig has been a rock at the back and he will have to be at his best again if Croatia aims to kill one more giant from the World Cup.

Brazil and Croatia face off in the 2022 World Cup quarter finals on Friday, December 9 at 8:30 P.M IST. Brazil overcame South Korea 4-1 in the Round of 16, while Croatia eliminated Japan on penalties. Brazil are surely the favorites going into the match and would be hoping for an easy route to the semi-finals. But Croatia in the last five years has shown that they can’t be written off so easily. This will be an exciting contest to watch as South American giants take on the underdogs from Europe in the first quarter final. 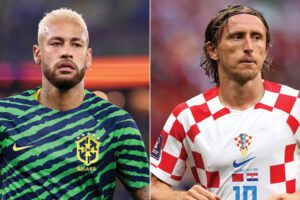 Easy win for Brazil or Croatia will kill another favorite?

Morocco continued the tradition of World Cup upsets as they beat Spain in almost near perfect penalty shootout in the penultimate Round of 16 match. It was a tight game from the off, and nobody wanted to make a mistake in this do or die game. Morocco have kept it real tight at the back and have only conceded one goal throughout the tournament and that solitary goal also was an own goal. The Morocco manager was precise with his substitutions and his plan of introducing fresh legs onto the field went very well as they held on till the penalty shootout. Morocco will face a stern Portugal side who have qualified as the team that has scored the joint most goals in the tournament.

Portugal have been pretty consistent barring that shock loss to South Korea in their final group game. Everyone was hoping for a shock defeat again for Portugal when they were set to face Switzerland. But Portugal came out all guns blazing and smashed their opposition apart by scoring six goals and all with absolute class and technique. They were excellent in recovering the balls in defense and didn’t let Embolo and Shaqiri control the game. All the attacking options had a brilliant game and were managing to find each other with class.

Portugal would have to be at their best if they have to beat a hardcore Morocco side. Portugal will surely enter the match as favorites and would be looking to control the game right from the off. This is a tie where the first goal matters a lot and both the teams might be looking to make early inroads into the opposition defense and then sit at the back conveniently. Saturday will decide whether we see another big upset from the African nation or will it actually be Ronaldo’s year where he goes right till the end. 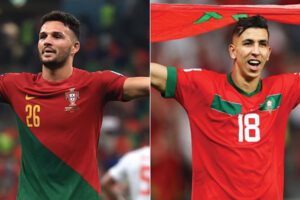 Do you think Ronaldo would start this game?

France lost its final group stage match against Tunisia due to the absence of many key players, but the defending champions defeated Poland 3-1 to go to the quarterfinals. Kylian Mbappe is showing everyone why he is regarded as the best youth and football talent in the world. He is the equal leading scorer and hopes to add further goals and a World Cup title to his collection. They have a new look midfield which is filled with youngsters that are bossing their opponents and have looked good so far. Their defense has a lot of options and have conceded goals but the comeback of Raphael Varane is a major boost for France.

England drew 0-0 with the United States in the group stage and had a three-goal differential in their other games. In the Round of 16, the Three Lions eliminated Senegal 3-0. England’s greatest players have been in stunning form and have looked at their utmost best at this World Cup, including Phil Foden, Jude Bellingham, Harry Kane, Marcus Rashford, and Bukayo Saka. Kyle Walker will face a stiff test as he attempts to match Kylian Mbappe’s pace. It will be an exciting competition.

The defending champions France would face the 2018 World Cup semi finalists England in the FIFA World Cup 2022 quarter final encounter on Saturday night at the Al Bayt Stadium. Both sides have put up great performances since they have qualified and professional attacking players. This is the biggest match of the quarter-finals and all eyes will be on this match to see which team will progress. Whichever team wins the game, will surely make a bold statement and clarify it’s motive on winning the World Cup 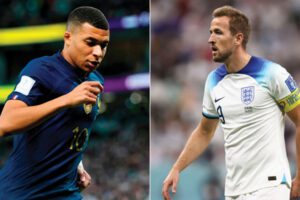 The Qatar World Cup has reached the business stage, and a slew of significant nations have been pushed out. The competition is currently down to eight teams, with Europe, Africa, and South America still represented. Supporters of Cristiano Ronaldo and Lionel Messi would be thrilled to learn that the two superstars are still present – and on opposite sides of the bracket, implying that a final battle between the two GOATs is still possible. Which clubs do you believe will advance to the semi-finals, and which do you think will win this coveted trophy?

Mahendra Singh Dhoni is probably the greatest captain of all-time and he has excelled in almost all aspects of the game. His cool and...

Here's how to properly enjoy the summer season: by making a refreshing mango mojito! Enjoy this tart, fizzy drink balanced with the sweetness of...