Rannvijay Singha: “QUITS Roadies” after 18 years and fans reacted back with “memes”

Rannvijay Singha Roadies generational leader, shocked all the fans after knowing that this year of 2022 he will not be there as a Leader, somebody else will replace him. The publication said it will be Sonu Sood, but fans after this Rannvijay fans went crazy and bombarded the twitter with the memes. Read on!

MTV Roadies Ranvijay has been part of the show for the longest period, he came as a contestant, became a Roadie, judge, team leader and even a host. His impact on Roadies has been a lot, most of the roadies wishes to be part of his gang. But, unfortunately in this 2022 year we will not be able to see Rannvijay at all. On Feburary, 2022 it was announced that Ranvijay confirmed in an interview, that he will no longer be part of this 2022 roadies and shared his view that it was not going well.

Rannvijay told Hindustan Times, “The channel has been a key pillar in my journey and I will be doing interesting work with them. On this edition of Roadies, things did not work out from both sides. Our dates were not matching and it is disheartening.

Added, I have been working with the MTV channel for 18 years. I have done different shows with the network which were Ex- roadies, roadies revolution, MTV spilitisvilla, MTV Troll Police, MTV Force India Fast and many other. He said Production house aur mera koi taal mel hai nahi.” He clarifies that it has nothing to do with the production or any sort of fight but it is about the schedule for it, which is not going along with Rannvijay’s plan.

Rannvijay Singha said, “I have been working with the MTV channel for 18 years’.

Though Rannvijay presence does not ended with his famous shows, but he has been part of 3a.m. ,kya kool hai hum, mismatched, and Pukaar. One of the akshay kumar movie Action Replay, Dharti, sharafat gayi Tel Lene he has done diverse and interesting role in the industry.

As Rannvijay has revealed his statement from a media house, fans were shocked and dishearted. One of the fan wrote, Sir this year Roadies will not be same as before. I have watched Roadies every year all because of you. Other fan expressed, This is truly an end of an era sir, Roadies has no definition without you being a part of it. LOTS OF WISHES and LUCK for your future projects. Keep killing it. 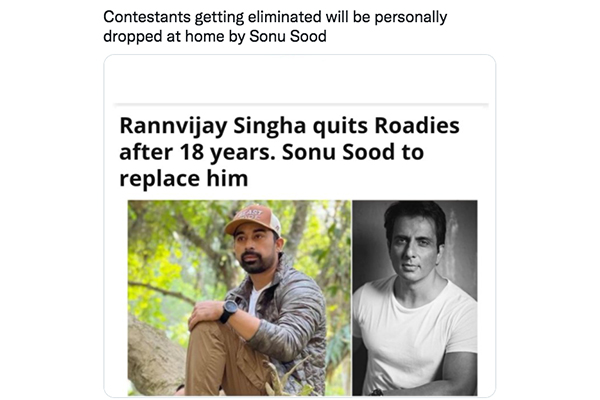 After the years of Rannvijay presence on the show, expecting to see Sonu sood does sounds, unpredictable.

One of the surprising announcement was that Sonu sood will be holding a place of Rannvijay. After the years of Rannvijay presence on the show, expecting to see Sonu sood does sounds, unpredictable. When this news was being rumoured in the media, fans made some interesting memes for this event. One of the fans wrote would not be surprised if sonu sood changes the show name “Roadies” to  “Homies”. Another fan wrote, contestants getting eliminated will be personally dropped at home by Sonu Sood.

Though Sonu Sood replacing Rannvijay Singha, will be happening in the history for the first time in Roadies. The fans memes reaction towards the news, came humorous with their creative memes. In Roadies 2022, Sonu Sood as mentor will be interesting and new for the show.

Something’s Shady In The Latest Sunglasses Launched By Oliver Peoples!

If you focus on what matters, like a good pair of shades. Well, we can be good friends, but Oliver Peoples cannot join our...

Sourav Ganguly is a name and the face in the Indian Cricket who has been linked with controversies for the longest known time. Another chapter...