While people lost their cool in the theatre, have a look at how R Madhavan requests them to stay calm.

Recently released Indian biographical drama film Rocketry: The Nambi Effect is breaking all the records at the box office with its spectacular screenplay. The movie that chronicles the life of an Indian aerospace scientist, Nambi Narayanan is making a loud presence in theatres and the hearts of the audience. Starring R Madhavan, Simran, Rajit Kapur, and Ravi Raghavendra is an Indian biography of scientist Narayanan who worked at the Indian Space and Research Organisation (ISRO) and his struggles when he was tortured while in detention after being unjustly suspected of spying.

The special part of the movie is that the talented actor R Madhavan not only played the lead role and directed the movie, but he has also produced and written Rocketry. Madhavan also called the film his first and last as a director while describing how he was never given the credit for being the first actor to set the ‘trend of pan India film. The movie was released on July 1 this year and so far, it has received great appreciation from the fans and the critics as well. The Hindi version of the movie also did pretty well however, the appreciation garnered by the film is extremely massive. 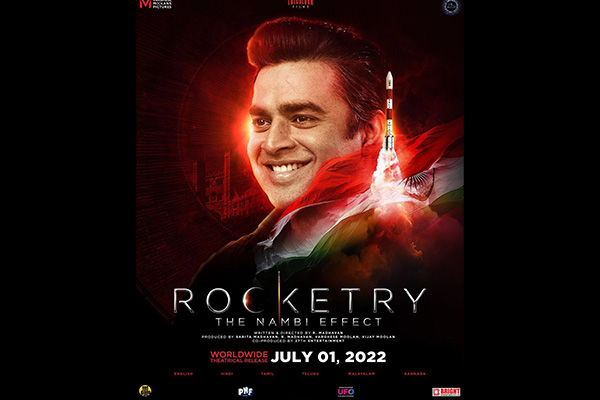 Rocketry was released worldwide on July 1, 2022.

While the audience has been enjoying the movie in theatres, there was a group of people in Kolkata who were interrupted in between the screening of Rocketry: The Nambi Effect. Reportedly, a group of people in Kolkata lost their cool while the screening of Madhavan’s movie was halted midway and amid the audience waiting, the management of the inox theatres didn’t do anything, as per the reports.

Taking the matter to Twitter, one individual from the audience, who was present during the incident shared a video where people were having a riff-raff with the management of the inox theatre as they spoke in Bengali and Hindi, how their time was wasted due to the long halt. People also mentioned that their money and time were wasted because they had to wait for such a long time for the screening to resume, while the officials of the theatre were just roaming around. 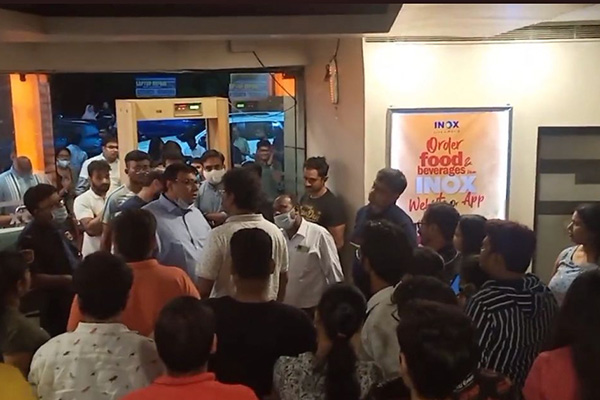 When the screening of the movie was stopped midway, the audience lost their cool.

In one of the videos that have been shared on social media, the inox official mentioned in Bengali that one of their staff members went to the nearest city center, Salt Lake to get the IMP card. People were even seen asking for a full refund due to the mismanagement that took place at the theatre. This video was posted on Twitter with the caption “Why did Inox stop the show on your own during the #RocketryTheFilm movie?  while also mentioning R Madhavan. 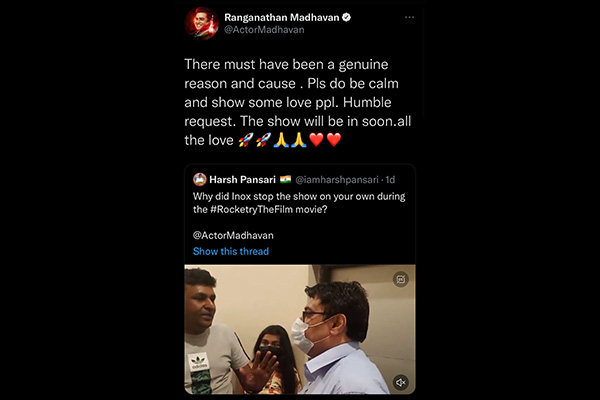 R Madhavan noticed the matter and requested the admirers to keep calm.

In another clip that was shared on the same platform, several people out of the audience demanded a full-fledged refund of their money from the management, which turned into a heated argument, where the official asked a person to go outside the theatre and wait in a queue if he wanted a refund. While many users commented on this post, one of the users shared that people couldn’t even watch the climax of the movie due to Inox’s mistake and thereafter, denied refunding the money.

To this, R Madhavan commented while sharing the post that the incident might have taken place due to a serious issue and requested his admirers to stay calm.

The season of snuggling in your favorite cozy blanket and having delicious food is here. Speaking of gobbling on some comfort food, here we...

Balenciaga Does it Again – Hopping on the Nonsensical Fashion Train, Yet Again

When talking about nonsensical fashion, Balenciaga always manages to make a place on the list. Take a look at the latest product to give...