The Movie Marks The Debut Of Kartik Aaryan As A Producer And Action Hero Alongside Kriti Sanon.

Kartik Aaryan has never failed to spread his charm with his looks, great comic timing, and of course, his fantastic dance skills. This time, apart from all these qualities, the Pyar ka Punchnama actor has tried his hands at bashing some baddies in his upcoming film. Yes, you guessed it right. The trailer of much looked for ‘Shehzada’ has finally been dropped by the makers, days after the lead actors Kartik Aaryan and Kriti Sanon revealed the wrapping up of the schedule. 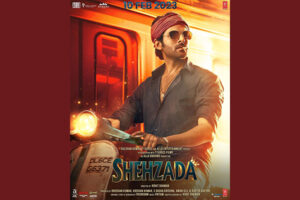 Alongside Kriti Sanon, Paresh Rawal, Manisha Koirala, Ronit Roy, and Sachin Khedekar, Shehzada also marks the debut for Kartik AAaryan makes his producing debut with the Rohit Dhawan film, which also has Sachin Khedekar and Kriti Sanon in key roles. The movie is a remake of the 2020 Telugu movie Ala Vaikunthapurramuloo. The original Telugu movie starred the south superstar Allu Arjun.

In the trailer, we can see Kartik Aaryan the masses in a family manner as he is seen bashing the bad guys for the first time on the big screen. Looking at the trailer, the plot revolves around the character of Bantu (played by Kartik Aaryan), who finds out that he is the son of a multimillionaire Randeep (played by Ronit Roy), and not of Valmiki (played by Paresh Rawal), a middle-class man who works for Randeep. The story then turns to Kartik Aaryan claiming to get a hold of everything that he believes is his right. 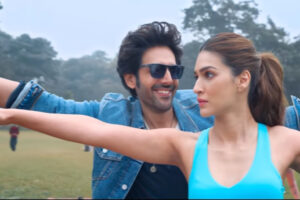 The audience will get to see the chemistry between Kartik and Kriti yet again.

Alongside, the trailer also gives us a glimpse of Kartik Aaryan and Kriti Sanon’s chemistry, which we’ve already spotted in ‘Lukka Chuppi’. Other than that, how can you miss out on dance when it’s a Kartik AAaryan movie? So, yes, you can expect some cool moves in the movie songs as well.

After the great success of his previous movie, Bhool Bhaulaiyaa 2, the expectations have reached a higher level for Kartik AAaryan fans as people are now excited to see him in more and experimental roles. Well, that might be the reason why Kartik chose to give the action genre a try this time. Shehzada is a Rohit Dhawan directorial that will be hitting the theatres on February 10, 2023. 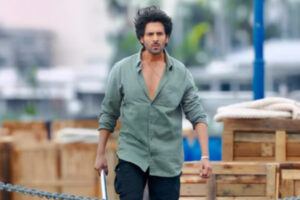 In Shehzada, Kartik Aaryan will be seen bashing the bad guys.

Since the release of the trailer, there has been quite a buzz around the internet for Kartik Aaryan’s work in his recent movie ‘Freddy’. The movie was making the headlines when it was released on the online streaming platform Disney+ Hotstar. While there was a section of the audience that was quite impressed with Kartik’s work in the movie, the others simply couldn’t get the flavor of intensity they wanted from Freddy.

Coming back to Shehzada, many Bollywood celebs shared the trailer while appreciating the team of the movie for their efforts. Karan Johar, Stebin Ben, Arjun Kapoor, and others shared the snippet of the trailer on their social media handles as they congratulated the team Shehzada.

Forget outdoor sports! Online gaming is emerging as the fastest-growing sport in the world with generations glued to their digital screens for hours. What are...

Never Skip Caring for Your Lip

Once in Our Lifetime We All Have Experienced Dry, Rough, & Pale Lips. Do Not Ignore Them Because Red Lips Never Lie! “The Curves of...

Here Are Some Tips For You To Make Exercise A Habit

Get your body back in the gym game and your mind focused. Here are some hacks to help you be consistence with your exercise....

BCCI has announced the schedule and venues for the Indian Cricket Team’s home season which includes series against New Zealand, Sri Lanka and Australia The...

There isn’t a great long history of fast bowling players becoming all-rounders at least in test cricket. But those who have represented their teams...