The Origins of Casinos – A Short History of the Casino Industry

Going to the casino and gambling is fun, but did you know that the history of the casino industry is equally interesting? Read on to know some truly fun facts about it!

Humankind has always been avidly interested in new ways of spending time in fun ways. One fine day, this search led them to the notion of gambling. Since then, we’ve all enjoyed the fruits of labour of that person’s thought process. If you’re as interested in knowing about this interesting history behind gambling and its origins, read ahead. 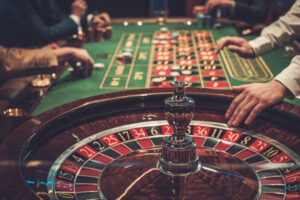 Some historians hold the belief that the game of craps originated in Ancient Rome.

We can very safely say that gambling predates recorded history. And it was not just the Chinese, even the Romans have a huge contribution to the origins of gambling and casinos. After crossing the Rubicon and beginning his campaign of becoming Rome’s dictator, Julius Caesar made a famous proclamation, “the die is cast.” Now this concept was not exactly foreign to the wealthy Romans, who were used to participating in public gambling during the Saturnalia festival. This is one hobby that apparently ran in the family, since his nephew, Augustus – the first emperor of Rome – was known for holding raffles at lavish banquets. He was also known for playing the Roman game ‘alea’ – which was an early form of backgammon. Emperor Claudius was a notorious dice player and Caligula was also a big gambler. Some historians hold the belief that the game of craps originated in Ancient Rome. Soldiers would use upturned shields as tables and pig knuckles for dice. This is why we still use “knucklebones” as a slang for dice games today, even after 2000 years.

The Chinese were, however, the first to make a living by gambling in casinos. During the Tang dynasties (617-908 A.D), several gambling organisations were created for players to gamble at designated venues. These venues provided heavy security and high-stakes gaming action. Then around 1000 A.D., during the Song Dynasty, several more gambling groups formed as more gambling games started being invented. As these establishments started to flourish, more and more of the Chinese populace began to treat gambling as a way of making a living. It was during the Song Dynasty that the game of ‘Xuan He Pai’ first appeared in these gambling houses. This game is the precursor to the one we now call Mahjong. 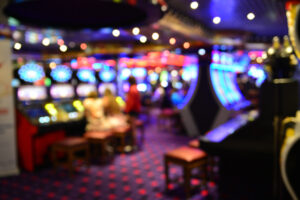 The first legal, government owned casino opened in 1638 in Venice.

It wasn’t until the 1600s, that established places to gamble were created. Even though gambling had begun to enjoy such huge popularity before, there was never any dedicated building for it before that. Players would just meet up in the privacy of their homes, clubs, or gambling dens. This was the reason that the need for regulating the industry cropped up and thus, the first casino was built.

The first legal, government owned casino opened in 1638 in Venice. It was named II Ridotto or ‘The Private Room’ in Italian and was in a wing of Palazzo Dandolo. The name came from the term ridurro, meaning ‘to close off,’ as it was situated in a separate wing of the palace. The Palazzo Dandolo hotel is still in operation, although it now has the name Hotel Danieli. It is one of the most luxurious hotels in Venice today. Before the Ridotto was created by the Venetian nobility, ‘ridotto’ was used for the various illegally operating gambling houses in Venice. The Ridotto was supposedly open to the public. But, given that it required a strict dress code which included having to wear expensive hats, and the fact that the games were only played for high stakes, commoners couldn’t play there. The casino was lavishly decorated with large ornate chandeliers, 20-foot-high walls with elaborate landscapes, and a plethora of gaming tables. The inside was even more ornate and extravagant because the patrons were also required to wear masks as a requirement of the dress code. It was also closed in 1774 since it was found to be morally objectionable by the ruling authorities of that time. But, another version of the Ridotto opened up in Venice in 1959 at a different location – the Ca’ Vendramin Calergi. 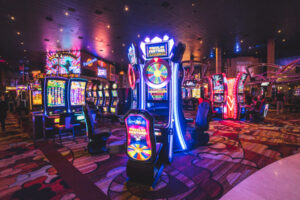 A steady growth in gambling was seen during the 1800s.

Besides the opening of the Ridotto, a significant boom in gambling houses also took place in Europe. Cities like Monte Carlo saw opening of robust, luxurious casinos. The German town of Baden-Baden and Spa in Belgium also became home to some of the best casinos in the world. As time went on, the gambling industry kept growing and more established places continued to emerge. As it started gaining popularity in Europe, the other side of the Atlantic Ocean didn’t stay idle – Americans started to adopt gambling practices as well. The concept of the French game Vingt-et-Un was adopted by the Americans. And so, blackjack came into existence in the 17th Century. A steady growth in gambling was seen during the 1800s. In 1829, early versions of poker were played in New Orleans in 1829 and the first slots machine was placed in New York in the late 29th century. But it was in the beginning of the 1900s that the largest gambling, drinking and depravity hub came into existence. 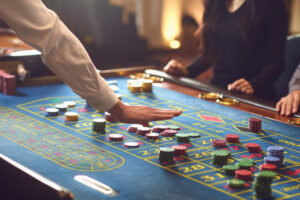 The first casino in Vegas was called the Golden Gate.

Vegas As A Gambling Hub

After all this, the gambling capital in the USA was formed – Las Vegas. When the railroad connection between Los Angeles and Las Vegas was being built in 1905, some workers wanted a way to unwind after working the whole day. So, they started playing cards. This got so popular, that it led to the city becoming a ‘city of sin.’ The Sin City then became synonymous with prostitution, vice, drinking, and gambling as well. In 1910, the state laws changed and gambling became illegal, up until 1931. But it didn’t change anything and gambling tables were set up in basements, in private homes, and in other secret locations. This underground gambling net became so popular that a heavy establishment was already up and running by the time the state legalised it once again.

The first casino in Vegas was called the Golden Gate. The first casino resort was also built in Vegas and it was called El Rancho Vegas. The scale of the resort was unprecedented. As WWII came to an end, the mafia took an interest in Vegas’s casinos, and thus, many gang-run casinos were built in the city. But in the 1960s, the mob started to lose its influence on the city and so a man named Howard Hughes began to buy Vegas-based real estate like hotels. And his vision was to create the first casino megaresort. And in 1989, the Mirage Hotel and Casino was born and it started to bring players to Vegas on a humongous scale. A few years after this, the casino industry migrated online. As we can see in the present times as today, online casinos are as popular than offline ones.

As the couple announces the wonderful news on their social media, let’s take a look at Sonam’s pregnancy phase. It’s time to congratulate the...

Karan Johar always brings big or upcoming stars from the film industry to his famous talk show, Koffee With Karan but this year we...