Ritesh Deshmukh’s directorial Debut movie Ved has performed well at the box office since it was released on December 30, 2022.

The Marathi film “Ved” was released on December 30, 2022, and registered an excellent collection in its 3rd week. This Marathi film marks the directorial debut of the actor Ritesh Deshmukh and is produced by his wife, Genelia Deshmukh. Ved movie becomes the 2nd highest-grossing Marathi movie after Sairat which earned Rs.110 crore at the box office. Actor Ritesh Deshmukh plays the lead role in this movie and also stars alongside his actor-wife Genelia Deshmukh, Ashok Saraf, Jiya Shankar, and Shubham Tawde. Bollywood actor Salman Khan also made a special appearance in the song “Ved Lavlay”. This movie is also television actress Jiya Shankar’s debut in Marathi cinema. 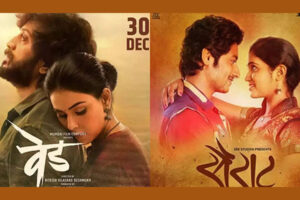 The audience loved the pair and praised their performance and direction as well. According to reports, the film Ved was made on a budget of Rs.15 crore and has collected Rs. 33.42 crore in the first 2 weekends of its release, and in its third weekend, this movie has collected Rs. 47.66 crores, as per reports. Ved not only proved to be a success at the box office but also broke many records when it came to Marathi cinema’s box office collection.

Taran Adarsh, a Trade analyst, took to Twitter and tweeted that the Marathi film Ved is now the 2nd Highest-grossing Marathi film after Sairat… As expected, business (biz) doubles on Saturday, and expect gains on Sunday again… This one refuses to slow down… Week 3, Friday 1.35 cr, Saturday 2.72 cr, Total: Rs.44.92 cr.

A few days ago, actor Ritesh Deshmukh wrote on his social media account, “To hit the highest single-day collection ever for a Marathi movie on the 10th day feels like a dream”. Further, he thanked his fans for showering so much love on his film Ved. 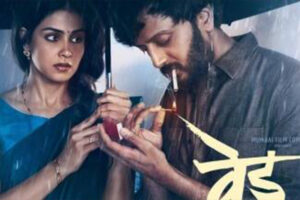 Ved is a remake of the Telugu-language film Majili

The Marathi romantic-drama film Ved is a remake of the Telugu-language film Majili, which was released in 2019 and starred Naga Chaitanya, and Samantha Ruth Prabhu and was directed by Shiva Nirvana.

The story is set in Mumbai, Satya Jadhav (Ritesh Deshmukh) lives in Mumbai with his father, Dinkar Jadhav, who aspires to play for the Indian cricket team and wants to be first selected for the Railway cricket team. Soon, Satya falls madly in love with Nisha (Jiya Shankar). However, Satya’s life takes an unexpected turn when the local politician Bhaskar ruins his personal and professional life. Meanwhile, Shravani (Genelia Deshmukh) had been in love with him but never told him. As soon as she learns about his love for Nisha, Shravani distances herself from him but marries him after a few years. At first, he didn’t even look at her, but later he understood her love and care and eventually fell in love with her. 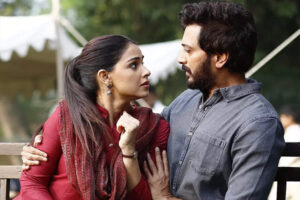 The audience loved to see this beautiful Jodi of Ritesh and Genelia Deshmukh on screen. Genelia still has the same freshness in her dialogue delivery and acting. She doesn’t have many dialogues, but her eyes and expressions speak volumes. Jiya Shankar, a TV actress, exudes confidence, but she needs to work on her acting skills. And actor Ritesh Deshmukh is mostly seen in funny avatars in movies, but in this movie, he channels the angst of his character well.

Halloween is the one time of the year that even the adults become as childish as their kids. To make sure you celebrate it...

Would you believe that Shatrughan Sinha and his family did black magic on Pooja Mishra? Controversies are a common deal in the entertainment industry and...

We met her after 5 long years and the feeling was mutual–Why the hell did we take so long to get Lisa back on the cover?   It was...

With the men's beauty industry on its way up, the market is getting flooded with innumerable products to help them look all the more...