Post Malone is one of the greatest artists in the music industry and has many hit songs to his name. At Mumbai’s Mahalaxmi Race Course, he gave his first performance in India on Saturday, mesmerizing a packed house of 25,000 spectators which included actors Mrunal Thakur and Malaika Arora, singer Armaan Malik, and actor-VJ Anusha Dandekar. “Let’s party a little bit”, Malone said as he entered the stage wearing a black t-shirt and shorts, sending the crowd into a frenzy. During an hour-long performance, the Rockstar singer sang 12 of his hits while including some “wild dance moves” he had been working on. 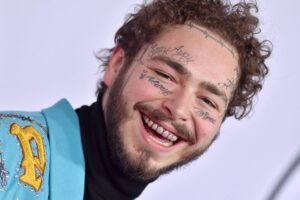 Malone mingled with his audience members as well, inviting one supporter who was holding a sign that read, “Can I play Stay for you?” on stage. The 27-year-old sang the ballad while the fan played the acoustic version and accepted his drink offer. Hardik Desai, a 24-year-old fan, also forced him to say, “Kya bolti Mumbai,” to a thunderous response. The Congratulations singer stated, “The love you’ve shown me has made my heart so full, I can never describe,” and added, “No one can tell you anything, keep living your dreams.” 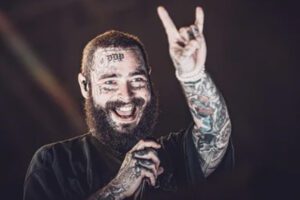 Malone proceeded to smash the guitar on the stage toward the end of his performance, sharing the broken parts with his front-row supporters. At the conclusion, Malone threw the T-shirt into the audience before returning shirtless. Some of the rapper’s admirers in the front row of the crowd noticed blood flowing from his right hand. According to a person familiar to the rapper, Malone was hurried out of the stadium as soon as the performance was over so the wound could be treated right away. 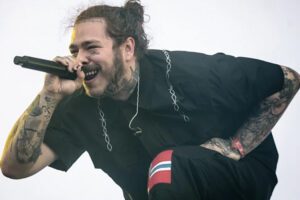 Ritviz performed after the opening act. Indian singers Jonita Gandhi, KING, KSHMR, and Anuv Jain earlier in the night, before Malone, established the mood for the show, which was organized by BookMyShow. Ritviz, the Indian artist, finished Posty’s performance while the bulk of the audience clapped loudly in support of him. Celebrities from Bollywood and the independent music industry crowded the backstage area of the event and made commitments to support Zomato’s initiative to battle malnutrition. With each ticket purchased, Zomato will feed 10 children through this concert. The price range for the various ticket categories ranged between Rs 5,999 to 24,999 and included Silver, Gold, Platinum, and Superfan.

Want to know what heaven feels like on earth? Exude in the tranquillity of this group of French Polynesians “Man cannot discover new oceans unless...

Ten Things No Man Should Have In his House

Ditch the fluorescent ball hammock and throw away your Ali G skull cap, right now…01. A MANKINI Men are inevitably judged by potential suitors on their...

While these hot moves will make him wild, you are going to experience the satisfaction too. You and your partner hit it off hard...