Arjun Kapoor can be seen in his “gunday” phase along with many great actors like Tabu, Konkona Sen Sharna, Radhika Madan, Kumud Mishra

Saying “Sabke sab kuttey hai saale” the Kuttey trailer features sarcastic remarks from Arjun Kapoor. And that sets the stage for an exhilarating, earthy, honest, and flavored with dark humor rollercoaster journey. The seven characters in gray shades seem to reflect the roles they will play in the film. Aasmaan Bhardwaj, the director, his father Vishal Bhardwaj, the Kuttey cast along with Arjun Kapoor, Tabu, Naseeruddin Shah, Konkona Sen Sharma, Kumud Mishra, Radhika Madan, and Shardul Bhardwaj—as well as Bhushan Kumar, Luv Ranjan, Ankur Garg, and Rekha Bhardwaj—were all in attendance at the trailer launch of the movie. The Kuttey trailer, starring Arjun Kapoor, was finally released today. Directed by Aasmaan Bhardwaj, the thriller movie also stars Naseeruddin Shah in a pivotal role. The film is all set for a  release on January 13, 2023. To launch the release of the trailer, the producers put up a sizable celebration. The actor recently published the characters’ motion posters, causing the fans’ excitement to grow even further. 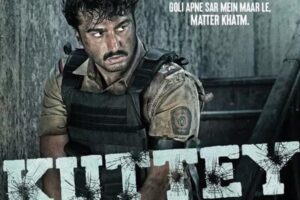 Arjun Kapoor will be in the lead role in this movie

The public will get to watch their favorite celebrities do an entirely new role from what they previously performed. The popular title song, Dhan Te Nan, from Kaminey, which stars Shahid Kapoor and was a chart-topper when it was released, is also teased in the trailer. To pique the audience’s interest, Vishal Bhardwaj, the person who composed the song (and directed Kaminey), also wrote the soundtrack for Kuttey and reused the Kaminey title track in Aasmaan’s film. Both fans and internet users appear to be excited by the darkly mysterious world of this engaging, exciting group of anti-heroes. Arjun Kapoor, Tabu, and other characters can be seen pointing guns at Arjun at the beginning of the video. Three gangs that come into contact while looking for money are the focus of the plot. All have the same plan but whose strategy will be effective is the question. 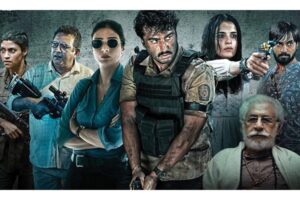 Well, the trailer is intriguing and suggests that the story centers around a robbery and how each character becomes engaged in it. Although the teaser gives each actor a good amount of screen time, Tabu steals the stage. We can’t wait to see the actress in Kuttey because she has received some of the finest dialogue. Expectations for Kuttey are naturally quite high because the cast is gorgeous, Vishal Bhardwaj wrote the dialogue and supplementary screenplay, and he also provided the music for the picture. We may infer from the teaser that Aasmaan has undoubtedly drawn inspiration from his father’s motion pictures. Therefore, let’s wait and see how Kuttey performs at the box office. 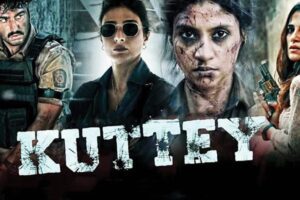 Any movie with Tabu in it, is already a hit movie

In Mudassar Aziz’s film Mere Husband Ki Biwi, Arjun Kapoor will star. The actor is also in negotiations for a number of additional movies. On the other side, Tabu has The Crew, starring Kareena Kapoor and Kriti Sanon, which again is anticipated to hit the box office next year.

10 Things All Men Should Do Before They’re 30

01. INVENT SOMETHING MSteve Jobs was 21 when he founded Apple, so get your skates on if you want to invent something that changes the world....

Evan Rachel wood is also known as Vienna and the Fantomes actress made an allegation against Marilyn Manson. Though not only she made an...

Ranveer Singh is back with another banging movie which is set to release during Christmas time The trailer for Rohit Shetty's comedy Cirkus, featuring Ranveer...