In the series of Marvel, Spider-man: No way home seems to be one of the greatest hits after Endgame.

Spider-man: No way home picks up the story right where ‘Far from home’ was left. With Mysterio revealing Spider-Man’s identity to the world as Peter Parker, the whole world is aware of his secret and now cameras follow him no matter where he goes. As a consequence, those around Peter now have to face obstacles in life. After having enough of the difficulties in his life, Peter comes up with the worst possible idea.

As shown in the trailer, Parker asks Dr Strange to cast a spell to make everyone in the world forget Peter Parker is Spider-man, even after fair warnings about the complications. But things take turn for the worse when the spell gets wobbled due to Peter’s disruptions, bringing the other villains from different universes into one creating a multiverse. When Parker tries to run away from the mess that he created himself, comes the role of the phrase that Spider-man has lived by all his life: with great power, comes great responsibility.

To fight the villains in the multiverse like Green Goblin, Dr Octopus, Sandman, Electro and Lizard, who try to kill him, Peter encounters the other Spider-men, Tobey Maguire and Andrew Garfield. In the multiverse, the three spidermen team up trying to fix the villains and free them up from the curse that turned them into evil. Although the plot of Spider-man entering into the multiverse is not for the first time, the spectacular visual execution and the way director Jon Watt plays with the dark and light themes according to the demand of the scene makes the movie quite engaging. 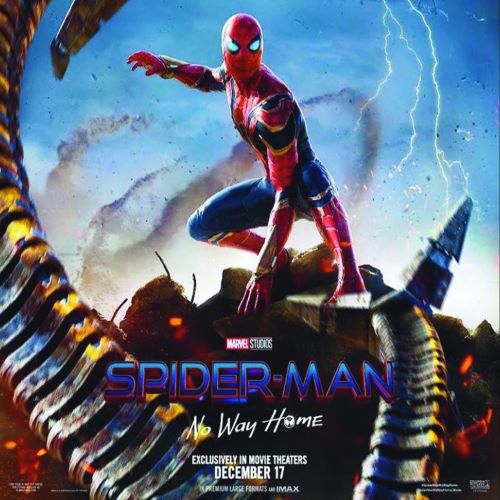 In the multiverse, the three spidermen team up trying to fix the villains and freeing them up from the curse that turned them into evil.

No teasers or spoilers could ruin the way No way Home turns out to be. Watching Tobey Maguire back on the screen as Spider-man after almost 20 years, made every 90’s kid feel nostalgic. Although all three of the cast, Tom Holland, Andrew Garfield and Tobey Maguire were impeccably ‘amazing’ as spidermen, Tom Holland has been the audience’s favourite throughout the last three releases of the Spider-man series. However, every marvel fan is well-aware of the characters that have been a part of the series from the beginning, but those who are interacting with the film for the first time, might not get confused with it because every character from the previous movies has spoken about the past, which is quite a move by the writers to keep the newbie audience attracted too.

The movie works great if you want to take an adventure ride into the world where these superheroes unite as one to fight the bad guys. Then comes the crucial and most awaited part of every Marvel movie, because every end is a new beginning and that is what the climax delivers. Yes, in the end, the spell works just about right and that is how marvel has still got its audience engaged by keeping them wondering what will happen next if the whole world has forgotten that Peter Parker is spider-man.

If you think you get to know every time something happens with a famous individual, you might be wrong. Although the paparazzi are present...

Experience these things before you turn 30

What are your plans for your flirty–thirties?If you ever thought that being in your 20s would be fun and now you are also struggling...

It’s Time to Say I Do – Interesting Facts About Weddings

September sees the most weddings and so to make things interesting, here are some interesting facts and figures about weddings that you'll find interesting. There...

What The Hell Is Kanamara Matsuri? Read It To Know…

It is the annual festival of the steel phallus. Its origins are well worth explaining. It's a joyful occasion - the celebration of manhood...